Traian Vuia, was a Romanian aeronautical pioneer, from Surducul-Mic, then a small village in the Austro-Hungarian Empire.  Being scientifically minded, he attended the School of Mechanics at the Polytechnic University in Budapest.  Due to a lack of money, soon he changed to study law so that, concurrent with his education, he could work.  Equally brilliant in all subjects, he was awarded a Doctorate in Law with a thesis entitled, “Military and Industry, State and Contract Regime”.  Yet he remained focused on his work in science and chiefly with one thing, the principles of flight.  Hampered from a lack of funding, with his own resources, he would achieve one of Europe’s first aviation triumphs: he would independently create a heavier-than-air flying machine and successfully fly it. 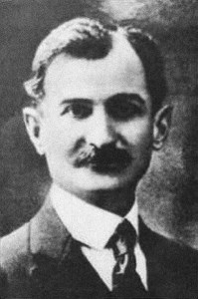 Yet none of that happened before the scholarly elders at the Académie des Sciences in Paris had rejected his research paper submission, which happened on February 16, 1903 — today in aviation history — with these famous words, “The problem of flight with a machine which weighs more than air cannot be solved and it is only a dream.”

When Traian Vuia traveled to Paris in July of 1902 to pursue his research into flying, he had done so because within Europe, Paris was considered the center of academical research.  He should have traveled rather to Huffman Prairie, but who in the world had heard of those seemingly anonymous bicycle mechanics named the Wright Brothers?  In Paris he met with Victor Tatin, a theoretician and experimenter who, like Vuia, approached the challenges of aviation from a deeply studied perspective.  Tatin had developed a model of an airplane and had flown it successfully many years earlier, in 1879.  In the ensuing time, he had come to one key conclusion — that what held man back from flight was not wings nor designs, but rather the low power and oppressive weight of engines.  Tatin told Vuia to temper his goals, for such a lightweight engine was still years ahead.
Considering these words, instead Traian Vuia set his mind to engineering a lightweight powerplant of his own design.  Though his paper on the principles of taking off into the air had been rejected by the Académie des Sciences, he nonetheless filed a patent on his research, which was awarded in August 1903. His powerplant research similarly pursued scholarly grounds, with numerous bench tests.  His engine relied on liquid carbon dioxide which was vaporized in a Serpollet boiler.  This gave him a three minute fuel supply at high power — it was a revolution. 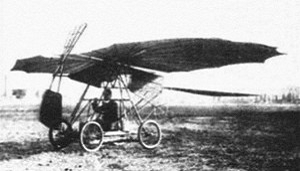 What held him back from going directly into flight experiments, however, was simply a lack of funds.  Nonetheless, he started to build his airplane in his small workshop in Paris.  He could only afford to proceed in fits and starts.  Few with money, it seemed, would back a dream of flight, despite the public’s interest in the subject.  Above, he believed his own conclusion that flight could be achieved safely and reasonably, as he had written in his rejected paper:
“L’aéroplane-automobile est capable d’avancer sur le sol comme une automobile ordinaire et ne monte qu’à la hauteur voulue par le pilote lui-même’ celui-si peut en effect, s’il le veut, avancer à la hauteur de quelques centimetres seulement au-dessus du sol, et par conséquent les expériences pourront être faites sans danger par toute personne sachant conduire une automobile.”
Translation:  The airplane is capable of accelerating on the ground like an ordinary car and only rises to the height desired by the pilo, so he can effect, as he desires, to achieve a  height of a few centimeters just above the ground, and therefore experiments can be done safely by anyone who can drive a car. 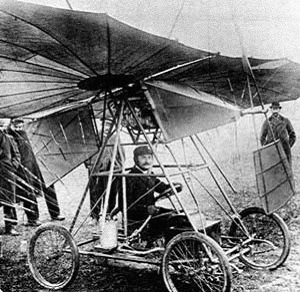 The Traian Vuia 1 flying machine with Vuia in the cockpit.

From an unlikely beginning on a shoestring budget, the Traian Vuia 1 emerged by Vuia’s own hands.  What could have taken him just a year instead had required nearly two and a half years of slow construction.  He had scrabbled together the funds to buy the fabrics, braces, wheels and tires and mechanical parts of his own flying machine.  At the end of December 1905, he was ready to begin controlled experiments.  By then, though he didn’t know it, it was already two years since the Wrights had flown at Kitty Hawk, though like most Europeans, he did not trust the news and rumor of such faraway events.
He called his aircraft the “Airplane-Car”.  He had pioneered a four wheel, light weight frame in which he sat to drive it forward by the force of its tractor propeller above and ahead.  The engine was mounted atop his head for easy access, with that and himself being positioned at the center of gravity underneath the wings, which were mounted with a roughly 15 degree positive angle of attack to the ground when the four wheels were not lifted.
His principles of take off were drawn from the original scholarly paper that the Académie des Sciences had rejected and had presupposed speed and angle of attack in a relationship that produced a known amount of lift against a defined wing area.  This flying machine would be driven forward at ever increasing speed based on the thrust from the propeller.  Then, when the wind speed had achieved a certain point across the fabric covered wing, he had theorized that the plane would simply lift off into the air.  It was a classic concept and one which remains still in use today. 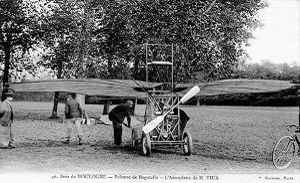 The Traian Vuia 1 bis, with some of the modifications learned from his first flights, shown here at the Bois de Boulogne in downtown Paris near the Seine, c1906.

At Montesson, a small town in the countryside near to Paris, he drew up his machine for his first flight test.  It was March 18, 1906.  First motoring back and forth to gain familiarity with the machine on the ground with the wings removed, he grew confident in its ground handling.  In fact, here Vuia had also invented the modern taxi test, which is de rigour for every aircraft design today.  Satisfied, he mounted the wings.  Climbing into the cockpit after refueling the engine, he was ready to try flight.
He triggered the engine to life.  With the large tractor blades of the propeller, the machine accelerated rapidly.  Just 50 meters down the path, he had achieved the speed necessary to lift off.  Exactly as predicted based on the angle of the wing, the machine simply lifted off from the ground.  It rose to about 1 meter in height.  He shut off the engine and the plane gently set back on the ground, landing almost instantly.
From take off to landing, he had managed a distance of 12 meters aloft — yet he had flown!  The test was perfect in every respect!

Incredibly, Traian Vuia’s airplane did not cause the sensation it should have.  While others who followed, including Santos-Dumont, who had followed Vuia’s work closely and benefited immensely, they would become superstars in the Parisian public eye.  Yet while Santos-Dumont and others would attain fame, Vuia had done something that few others had achieved — completely on his own, he had pioneered an original route to the air.  What’s more, unlike the others, he had done it on a shoestring based just on the power of his intellect, the work of his own hands and the strength of his dream.
Over the next couple of years, Traian Vuia would develop other aircraft and refinements of his design, but his efforts were ultimately a dead-end.  Others made more rapid advances, gained funding and investment and flew.  While Traian’s flight had been extraordinary, it still lacked a working flight control system.  He may have taken off and landed, but it was a limited type of flight with no way of achieving a turn, a climb or a dive.
Yet still, in those first heady years of the 1900s, Traian Vuia’s flight was truly a great achievement! 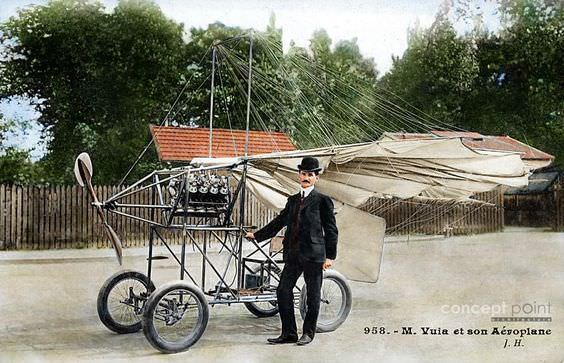