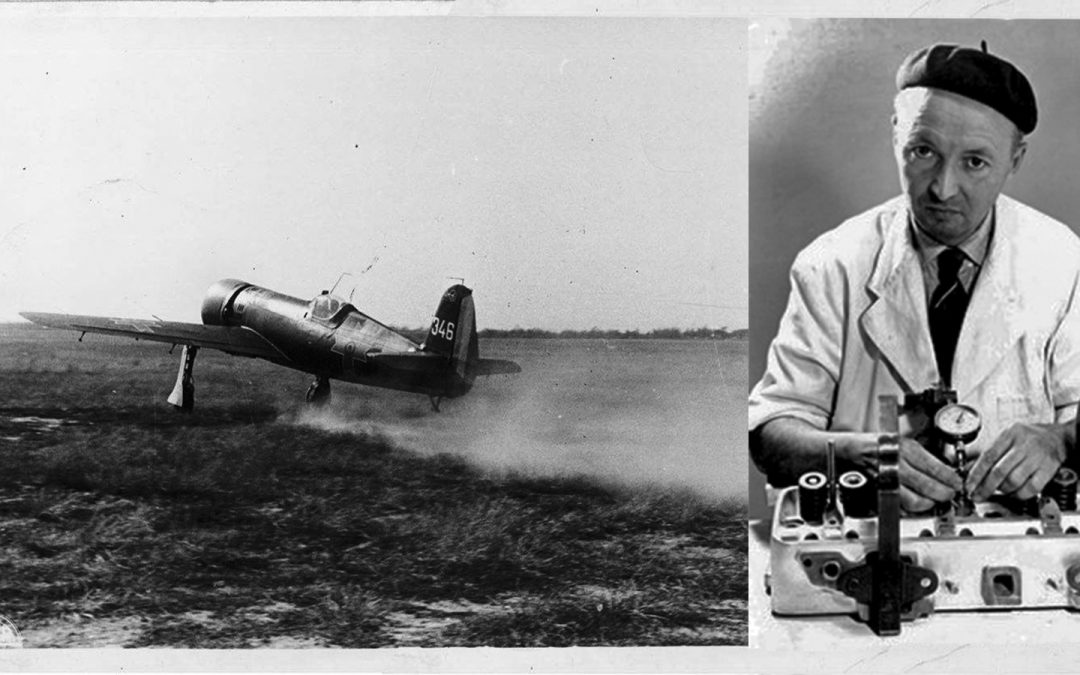 Romanian engineers have contributed in the early days of aeronautics, since the 20th century, to the development of this field. An example of this is the Romanian engineer of Bessarabian origin Teodor Gârneț.

Teodor Gârneț was born on 19 April 1911 in Roşu – Cahul, where he followed the “Cuza Vodă” High School in Huşi. After graduating from high school, he took the path of engineering by applying to the Polytechnic Institute of Timișoara in 1939, being quickly remarked for the speed and efficiency with which he works. He graduated with the diploma exam in June 1940, having the thesis on the plane, its calculation and its design. Teodor Gârneţ graduated from the faculty with a special appreciation and recommendation for the Romanian Aeronautical Industry (I.A.R. Braşov).

At the end of his batchelor he started his activity at I.A.R. Braşov. We apprehend from his own professional autobiography that he is working in this institution with the same motivation: “Since the time I was working on the IAR Braşov project for my diploma, I have noticed a special effort motivated by the fact that the term coincides with the deadlines of the two mobilization orders.” This “diligence” was noted by Eng. Müller von Wandau, Head of Motor Engine’s Office.”

In the socio-political context of the time, the problem of training pilots arose, because military planes such as hunting and bombing aircraft were too expensive to be the handled by novices. Thus, Teodor Gârneț was tasked with designing a feasible engine that had increased maneuverability and cheap manufacturing costs.

From his own accounts we find out: “I have worked in secretive and total isolation in defining and calculating the main engine parts to be called IAR-7M”. “The surprise was great and general when it was found that the engine was running to a greater power than that required by the initial design”. This engine is an achievement of Romanian aviation, being one of the best performing engines, surpassing all similar engines in service in Romania for 1942 (design date), but even for 1990, as it results from the technical reports engine tests, as well as specialized magazines from 1990-1995. After this extraordinary engineering performance, many magazines have repeatedly published appreciative presentations about the outstanding capability of this engine: in the “Science and Techniques” magazine, IAR-7M was called “the terrible child of the Romanian aviation engines”; Mr. Cristinariu Victor, then general manager of the ICA-Ghimbav aviation company and Eng. Dan Vardie, expresses his appreciation for this engine: “… We are dealing with the exceptional performances not only for 1942 (design date) but even for 1990, the IAR-7M is one of the best-performing star engines all over the globe, surpassing all similar engines in service in Romania.”

Since 1944, his inclination and passion for practical applications, he obtains the mechanical-rotational patent, competing with the skilled craftsmen and thus making the most out of his inventions and innovations. In 1951, on the basis of ongoing technological experiments, he was appointed to coordinate the establishment of the URMV3 Airplane and Engine Repair Company and, together with 4 colleagues, led the following sectors as follows:

Romanian-Bessarabian engineers invented and built the most powerful Romanian plane of the era, the famous IAR-80, a monoplane hunting and bombarding plane made at IAR Brasov, comparable to the most modern combat aircraft, such as the Bf 109 from Germany, Mitsubishi A6M Zero from Japan, Hawker Hurricane and Spitfire Supermarine from the UK. Engineers worked day and night to complete this work of mechanical art with a 1,000-horsepower engine that allowed the machine to reach high altitudes. It is known that Ion Grosu designed the entire steel frame skeleton, Mircea Grossu-Viziru had equipped the plane with weapons, Cosereanu and Alexandru focused on the hermetic cabin and on the landing system. Teodor Gârneț has been very helpful in designing the engine and the compressor.

After the French test pilot Michel Detroyat successfully tested it at the Pipera aerodrome, IAR Brasov started its mass production in September 1940. Initially one aircraft was produced per day, and after Romania’s entry into war, two planes per day. In 1940, the IAR-80 was among the top four best hunting jets in the world.

All this shows the quality of the Romanian aeronautical engineering in which Teodor Garnet played a leading role. Without its passion for airplanes, the determination to reach a remarkable final product without the continuous revolution of engineering engineering practices, the Romanian aviation domain would have had another face.

After a life full of exceptional achievements, working until the last days, he died on December 10, 1999, being buried in Cimitirul din Noua – Brasov. (Biographical Note drawn up by Horaţiu Isac, following documents from the family archive)