Where and When Smaranda Brăescu was born?

She was born in the village of Hânţeşti, Buciumeni commune, in the present-day Galați County. It is very vague, many say on May 21, 1897, but as an example, on her student grades book it is mentioned  May 23, 1904. We therefore conclude that the date is not so important, the most fascinating facts about this inspiring woman are the main points of interest.

The first woman skydiver in Romania

Smaranda Braescu did not want necessarily to become a skydiver, because she preferred the aviation field (she had always wanted to become a pilot). Born near Tecuci, in a peasant family, she witnessed the very first air raids of some military Romanian pilot: Lieutenant Gheorghe Negrescu (1888-1977). From the moment when she raised her look to the sky, she knew she would become a pilot sooner or later and the path to achieve this dream was not easy to pass. Even if many countries accepted women as pilots, Romania was not part of them, therefore it was extremely hard for Smaranda to overcome this impediment. For months Smaranda knocked on every door to get to speak with the military aeronautical authorities, but she faced a very determined refusal: in the air authorities leaders’ opinion, a woman must take care of her family and not take the heights. Probably many would have quit the thought of making this dream come true, but not Smaranda, who didn’t lose her temper and found an unconventional route to accede: skydiving. She borrowed money from an acquaintance, then she went to Berlin from where she purchased her first parachute. Thus, she possessed the ‚object’ that have given her countless satisfactions, and made her worldwide known. She learnt how to use a parachute at Berlin, with help from her instructor. At her very first jump, she put Romania on the map, making it the fourth country with a woman skydiver.

But in her country, this act of courage was interpreted as being a violation of the law of nature.  As an example, in her village, the peasants were saying „the Braescu’s daughter, with bad habits since she was little, boys’ habits, jumped with an umbrella from one airplane” -to be mentioned that in countryside umbrella was a synonym for parachute- Anyways, Smaranda was invited to participate in several air festivals, that took place in big cities from Romania.

The feminine mondial record at skydiving

Even she had to pass hard times, when she was injured after a bad landing, she decided that she wanted to take skydiving at a next level. Hardly recovered, she procures herself from Berlin a specially designed parachute for high altitude jumps. Equipped with this, Smaranda submits an application to the Aviation Superior Forces for being granted permission to train herself for record jumps. After much insistence and supported by Gheorge Negrescu, she obtains the necessary approvals and the order to train along with one of our aeronautics aces, Alexandru Papana. The feminine record, she was attempting to beat was 4000 meters, in Europe, set by a skydiver from Dresden. Smaranda flung herself into the air. No oxygen masks. The descent lasted 21 minutes and 25 seconds, the young woman needing three hours to recover from the state caused by the jump from 6000 meters, but she thus got the national record for parachute jumps, both for women and men as well as the feminine world record. The next day she was given the Aeronautical Virtue Order from King Carol the second.

This was an important moment for her, because from now on her work was recognized and appreciated. Maybe not many were surprised when she announced that she wanted to surpass the male world record (6.450 meters-only 250 higher than her previous height of the jump). This caught the media’s attention and „Universul” newspaper announced that hey are willing to support her, and they had made a subscription list, where people could have donated money. With the money raised from different persons plus 1000 dollars from the Romanian National Bank, Smaranda left the country on 14 December 1931 heading to the USA. She had chosen to reach the USA by boat (crossing the Atlantic). When she arrived at New York on Christmas morning she was astonished by the media’s attention. But soon she realized that their goal was to make her spend all her money and leave the country as soon as possible, for them to maintain their records. They started to make excuses for various reasons like: the nonexistence of a large-enough plain for her to land, and the ones that could fit this criteria were full of snakes. Luckily for her, someone sends her a telegram, informing her that in California, at Sacramento, between San Francisco and Sierra Nevada Mountains, it exists a plain that is more than good for her courageous plan. She got there, and she was given another parachute, just in case something wrong happens to her main one. Unfortunately, neither after 5 attempts, she could not jump from the needed height, because the planes could not reach the altitude of 6.500 meters, or from other diverse reasons. When she finally found a more capable plane, other problems occurred. Out of money she called for help, and the Romanian community from San Francisco raised for her 100 dollars. Smaranda then came to the San Francisco Bay Area with the hope of achieving her ultimate goal. To accomplish this historic feat, she made arrangements with noted East Bay Flyer Harry Bosshardt to take her aloft. On My 19, 1932, at 11 o’clock in the morning, they climbed into his powerful Cessna monoplane and took off from the Curtis-Wright Field of Alameda. Knowing of the tremendous altitude they would have to reach, Smaranda wore a double lather flight suit. 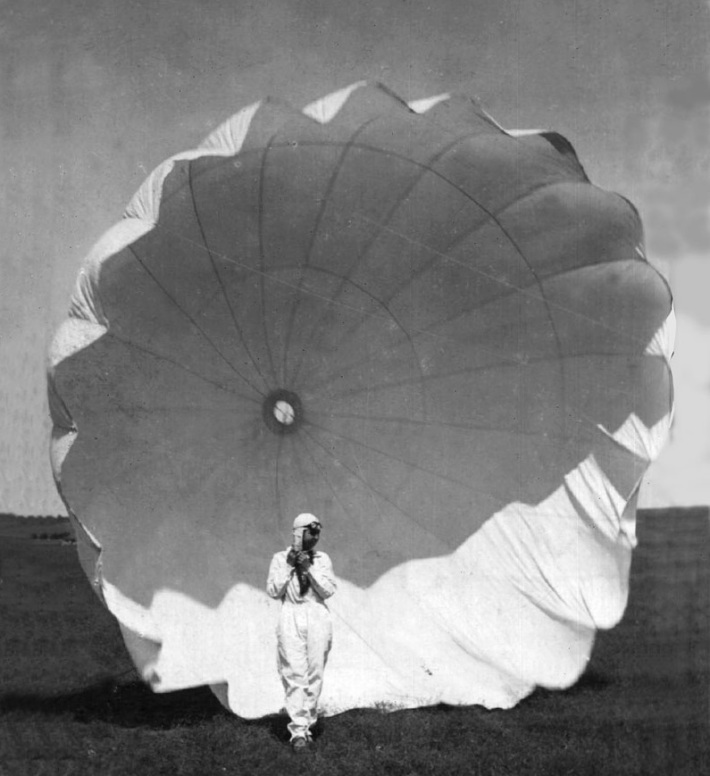 „We flew towards Sacramento for half an hour, climbing rapidly all the way. When we got to 18,000 feet altitude, both the pilot and myself put on our oxygen masks because it was getting difficult to breathe. For three quarters of an hour we fought to gain higher altitude – another five or six thousand feet were our goal. All the way up I had my eyes glued to the altimeter. At last it showed 23,500 feet and I was ready to jump. I signaled to the pilot, but he wanted me to wait, he mentioned we could get jut a little higher, We did, another 500 feet, which brought us to the 24,000 foot mark. Then I took the oxygen mask from my face, took one last big breath from it and jumped. I shot downward with the speed of a bullet, 3000 feet a minute (I found later), Before I had time to realize what was happening I got deathly sick. I couldn’t breathe, the air was so thin. And the last big breath of oxygen I had taken didn’t last me very long. I didn’t wear oxygen equipment because of its weight. The wind kept carrying me northeast. Then my parachute began to whirl in the wind currents and I got dizzy. I was spinning around. As I drifted nearer the ground I sighted a river and seemed to be heading straight for it. I feared drowning if I landed in the river. At an altitude of about 1000 feet I pulled the rip cord of my emergency parachute, hoping to slow down my speed and avoid landing in the water. But it didn’t work. The next thing I knew I had floated over the river, my feet almost dangling in the water, and landed in an open field.”

Between this, the lack of oxygen, freezing face and hands, and dizziness, it is amazing that she had any control at all over the situation. Even her pilot thought she had jumped to her death. According to an interview that appeared in the Oakland Post Enquirer, the pilot recalled „I couldn’t see her parachute open after signaling her to jump when my altimeter registered 24,000 feet. I watched for her shoot down with terrific speed for the first 8,000 feet, then I lost sight of her. I returned to Mather Field in Sacramento to replenish my fuel and sought aid to search for her body”. A search was conducted both in the air and on the ground , and happily, someone found her and notified that Smaranda had softly loaded.

She finally did it!

After this world record, the director of the „Universul” newspaper raised a fund to help Smaranda become a pilot too.  On October 8th, 1932, at the Flight School in Roosevelt Field, New York, Smaranda obtained her pilot license, becoming the third woman pilot in Romania. 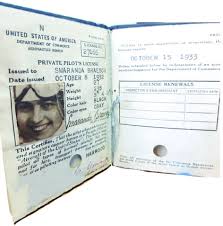 Smaranda left for New York in 1934. Having this American pilot license and flying her own airplane, a Miles Hawk she named “Aurel Vlaicu”, she flies across Europe, taking off from England and landing in Romania, defying rain and fog, navigating only instrumentally. Her departure from London was full of adventures. The British did not approve her take off because some papers of minimum importance were not proper. Smaranda didn’t give up and…she ”stole” the aircraft from the airport, flying over the bleak Narrow Sea. At the airport Le Bourget in Paris, she was met by engineer commander Nicolau Costel, on a mission. He knew how difficult it was to fly overseas, especially over the territory of France, dotted with villages and towns so close and almost indistinguishable, with dozens of railways and national roads. Orientation in such an environment requested great skills of the pilot.

But the greatest achievement of aviator Smaranda Braescu is the raid Bucharest – Rome – Tripoli, a flight over the Tyrrhenian and Mediterranean Seas, on a difficult route, rarely approached by male aviators and with much stronger aircraft. The Mediterranean cross-country flight took place on May 19, 1936, once again attracting the entire world’s attention on Romania and its people.

During the war she was active as a pilot in the famous “White Squadron” of medical aircraft on the Eastern front and then on the Western front, in Transylvania, Hungary and Czechoslovakia, with an important role in saving the lives of many wounded soldiers, being decorated, in 1943, with the chorus “Queen Mary”, grade III.

She protests against falsification of elections of November 1946, signing, along with other figures, a memorandum submitted to the Allied Control Commission. Unfortunately, it comes into the possession of a Soviet delegation and Smaranda Braescu is sentenced, in absentia, to two years in prison. Hidden by good-natured people, probably in a monastery under the name of Maria Popescu, her performances are doomed to oblivion. Smaranda Braescu has never been found.

SMARANDA, where are you?

Your pilot wings have taken to the skies

To lift you like a feather in your plane

Across the Ocean you have got from all

A hero’s welcome hailing you to fame.

But you refused all glitter and all gold

And chose instead returning to your nest

In the Carpathians a Squadron White you set

Your homeland to defend from mountain  crests

Against invaders from the East and West.

Protesting at an outcome so unfair

And so the wrath of Gods brought you Despair

A Fugitive to stay until the End.

As you conspired to reveal the Truth

You carried on your fight from underground

Your noble Creed which steeled a life so brave 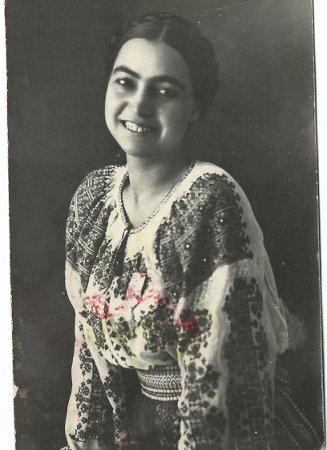 When suddenly Fate would  curtail your youth

To bury you, deep, in an unknown grave.

No family or friends were there to grieve

To light a candle at a stranger’s quest

No Requiems were sung by bearded priests

When your remains at night were laid to rest

And no hushed souls would know whom to bereave.

But your example was not all in vain

As History again moved on its Wheel

And five decades of sorrows passed us by

We finally are Free to sing your name

And honour you, at last, the best we can.

(from the volume: “Random Poems”)