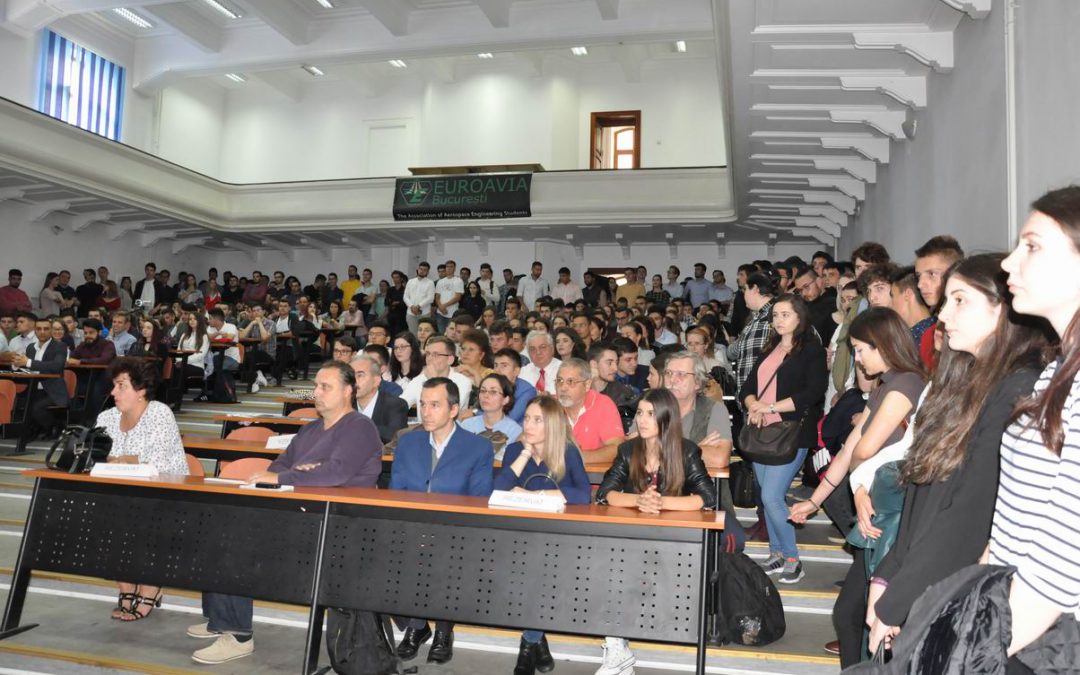 In the Radu Voinea AN010 amphitheater on 25 September 2017, 10 am, the Rector of the University Politehnica of Bucharest, Mihnea Costoiu declared the new University Year 2017-2018 opened, in an enthusiast atmosphere. The Rector pointed out the value and the tradition of the Bucharest Polytechnic school, which will celebrate 200 years right in this UY. The speech of the President of the Senate,  Ecaterina Andronescu was touching, on a powerful motivational note. More about this ceremony <here>.

The Faculty of Aerospace Engineering held its opening ceremony in the Virgil Constantinescu F024 amphitheater, at 2 pm. Dean Assoc. Prof. Octavian Thor Pleter, Department Directors Prof. Sterian Dănăilă and Prof. Adrian Stoica participated, as well as the former Dean 2008-2016 Prof. Virgil Stanciu. An interesting fact is that both amphitheaters used in thsese ceremonies bear the names of two great personalities of UPB-FAE, Acad. Radu Voinea and Acad Virgil Constantinescu. Both were Presidents of the Romanian Academy and in the same time taught many generations of faculty students in the disciplines of mechanics and aerodynamics, respectively. 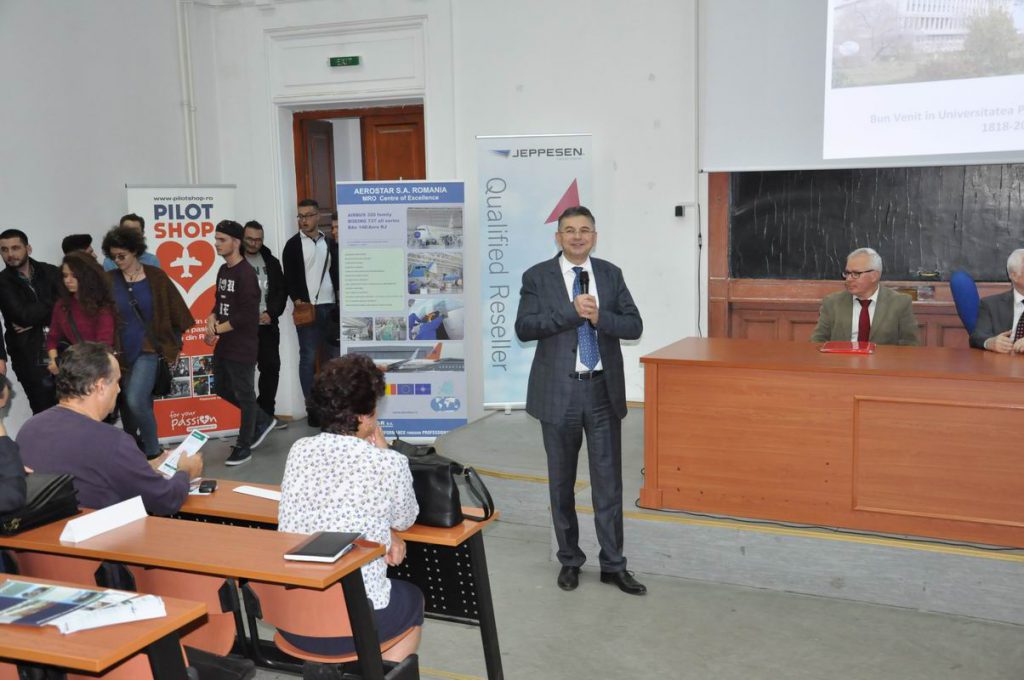 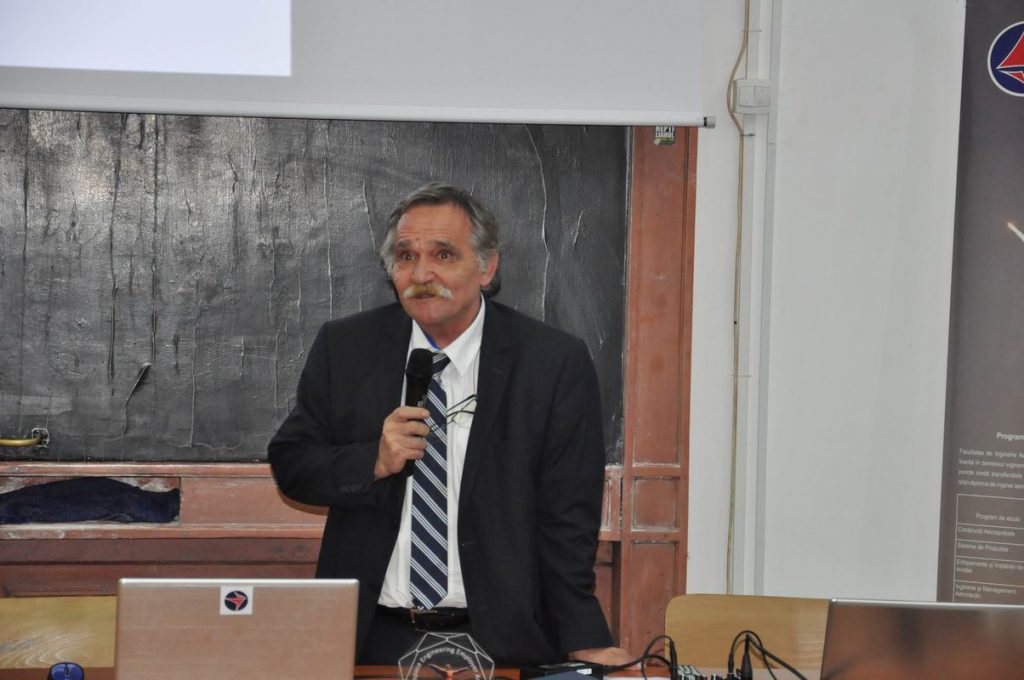 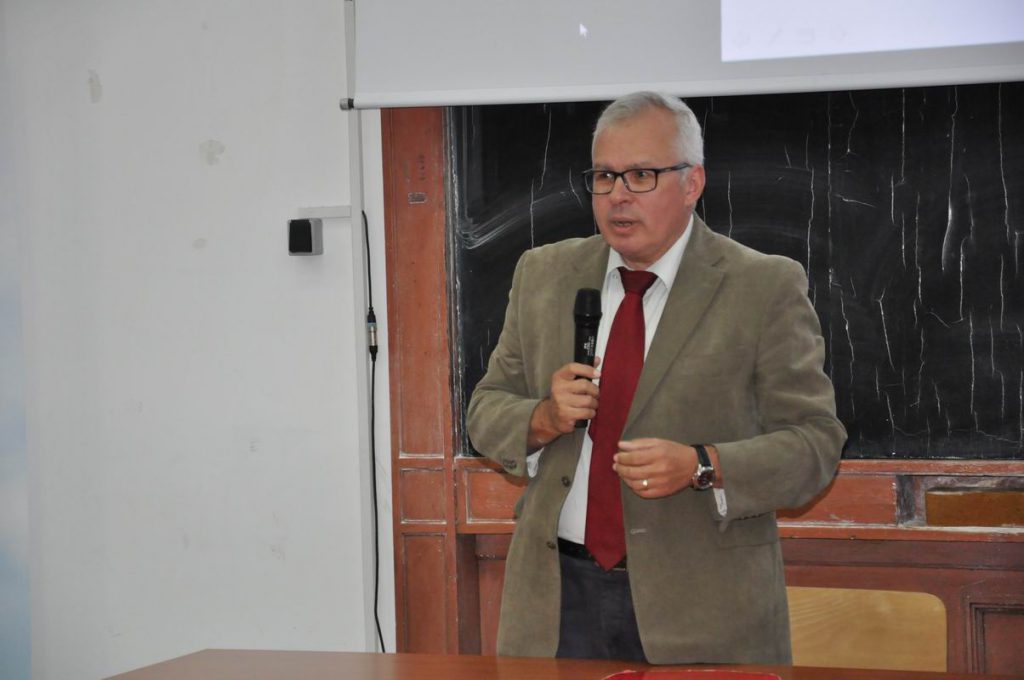 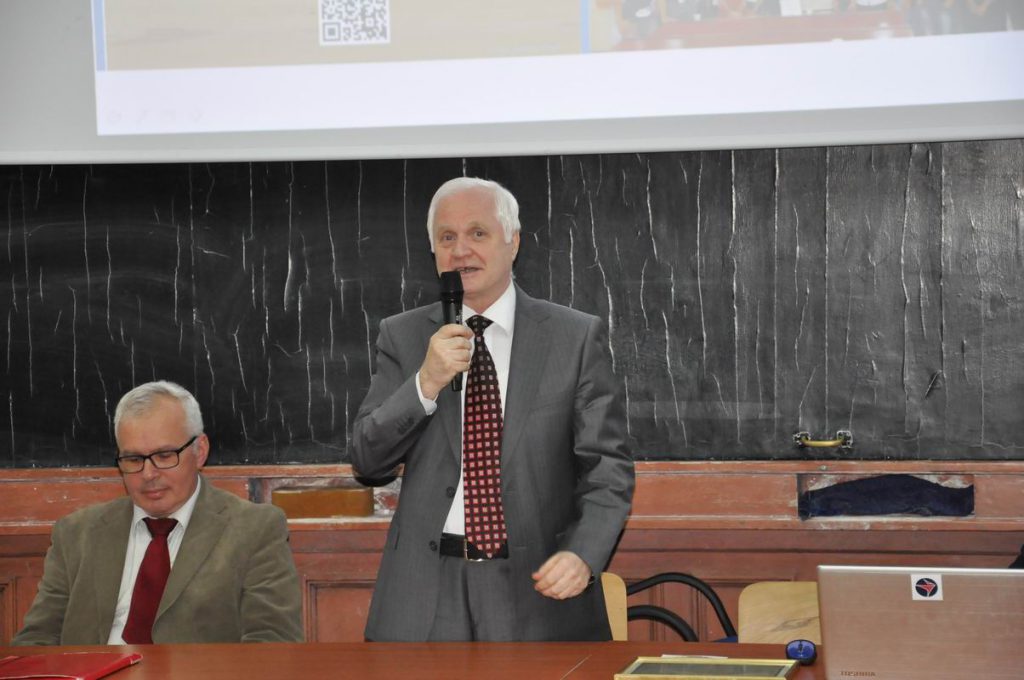 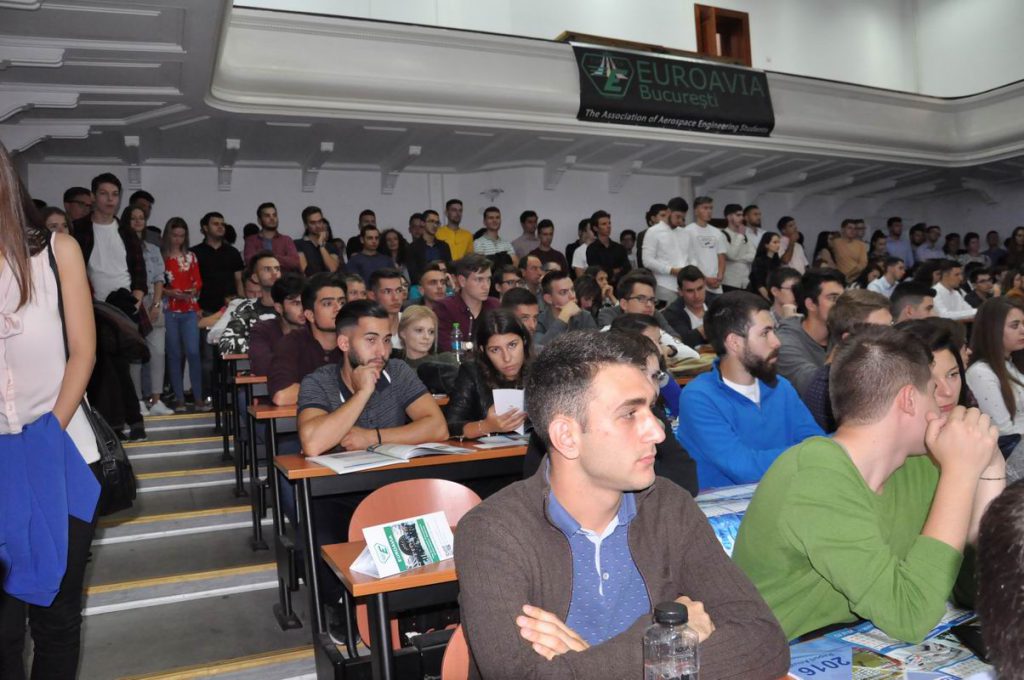 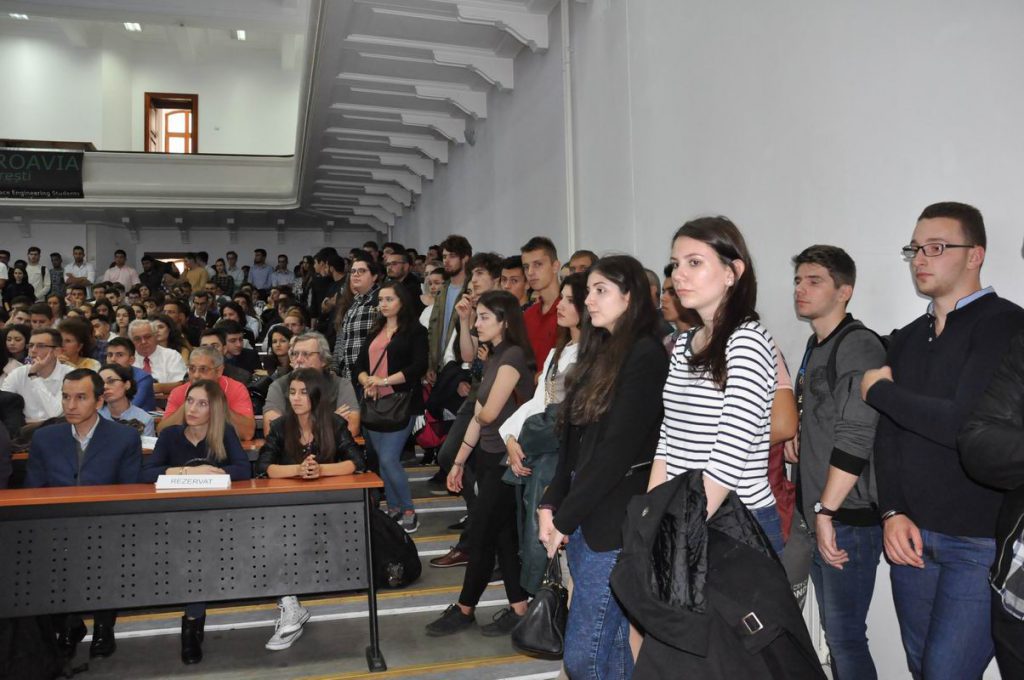 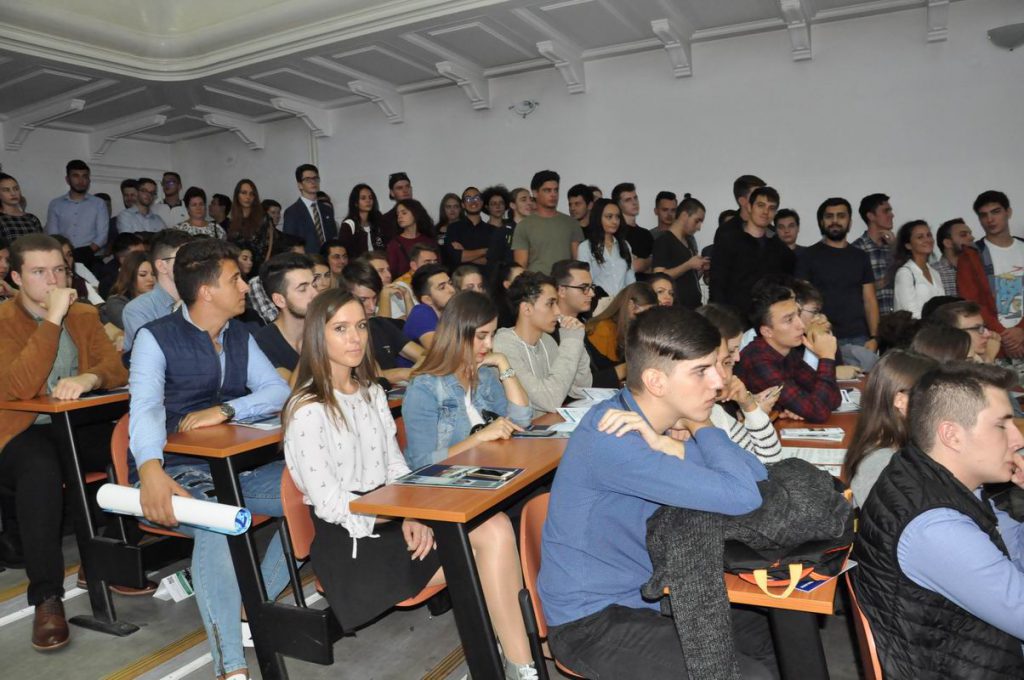 The Dean presented the Best Aerospace Engineering Employer Award 2017 to AEROSTAR S. A. Bacău, reprezented by HR Director Dr. Eng. Dan Paul Mălin Popa, accompanied by the young engineers Gheorghe Popescu and Ioana Ionescu, two of the 32 graduates of UPB-FAE employed by AEROSTAR in the latest years. AEROSTAR S. A. company is expanding and runs contracts with large international aviation companies, including Airbus and Boeing. Director Popa pointed out the high expectations in this cutting edge technology field and assured that AEROSTAR has plans to continue to hire graduates. 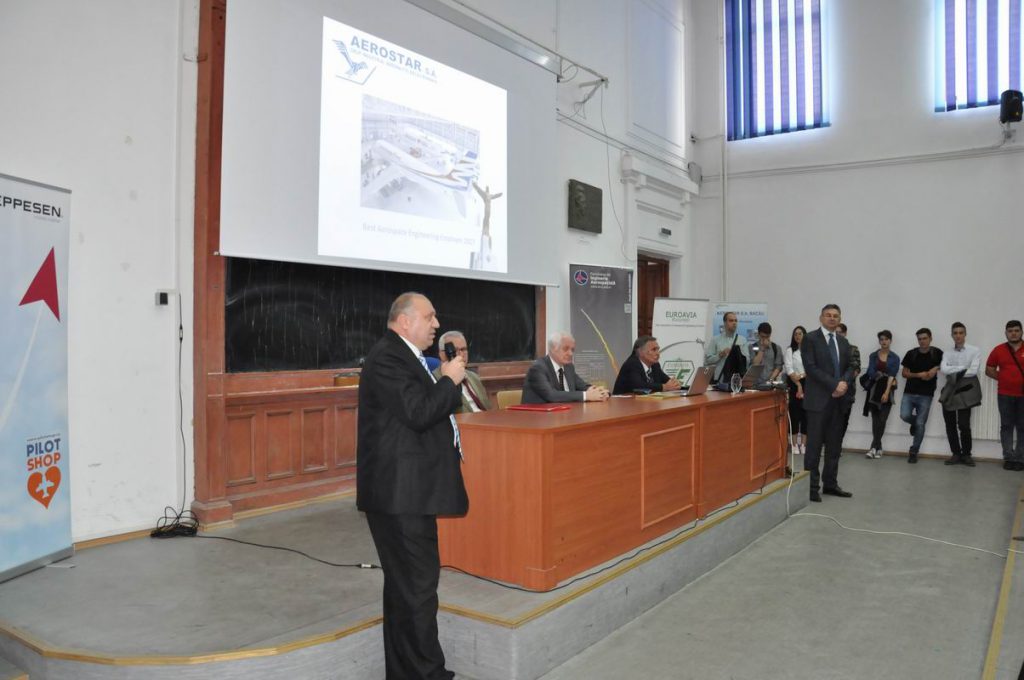 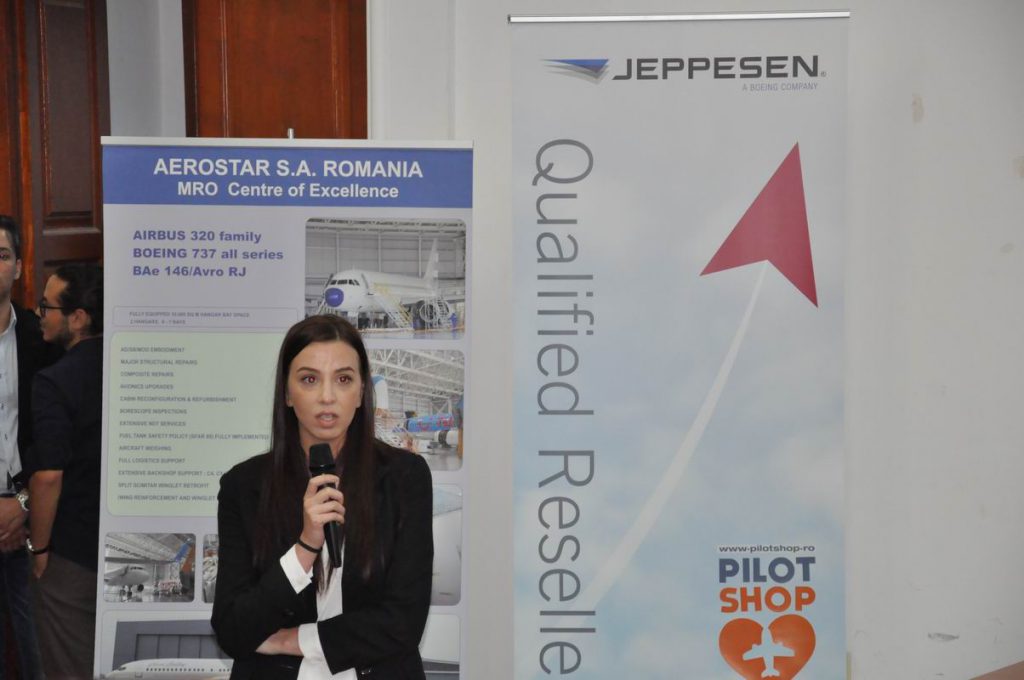 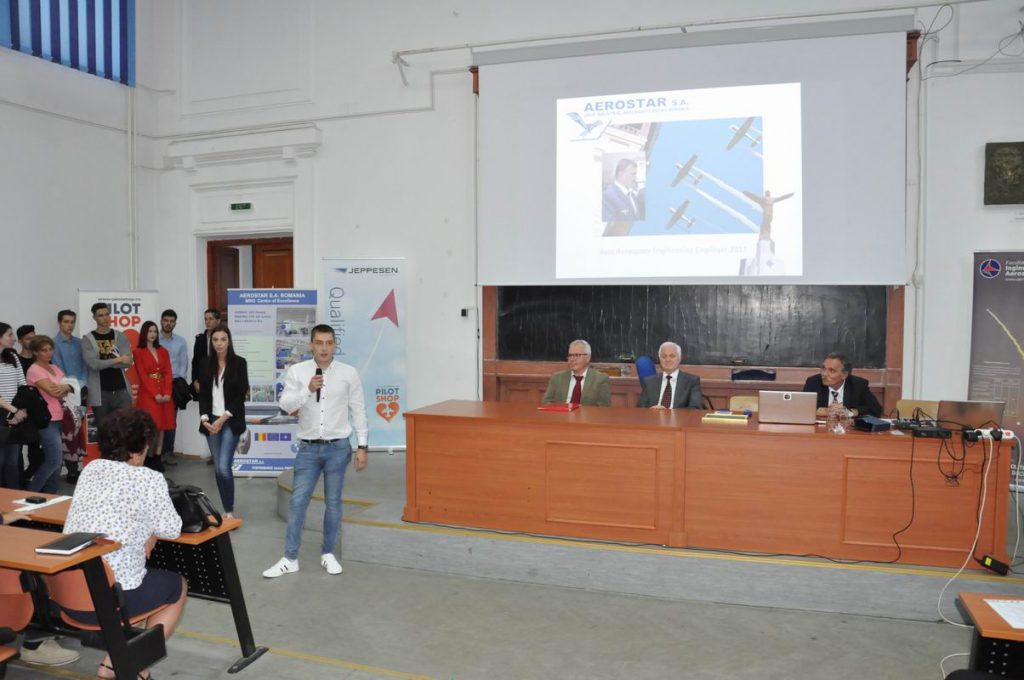 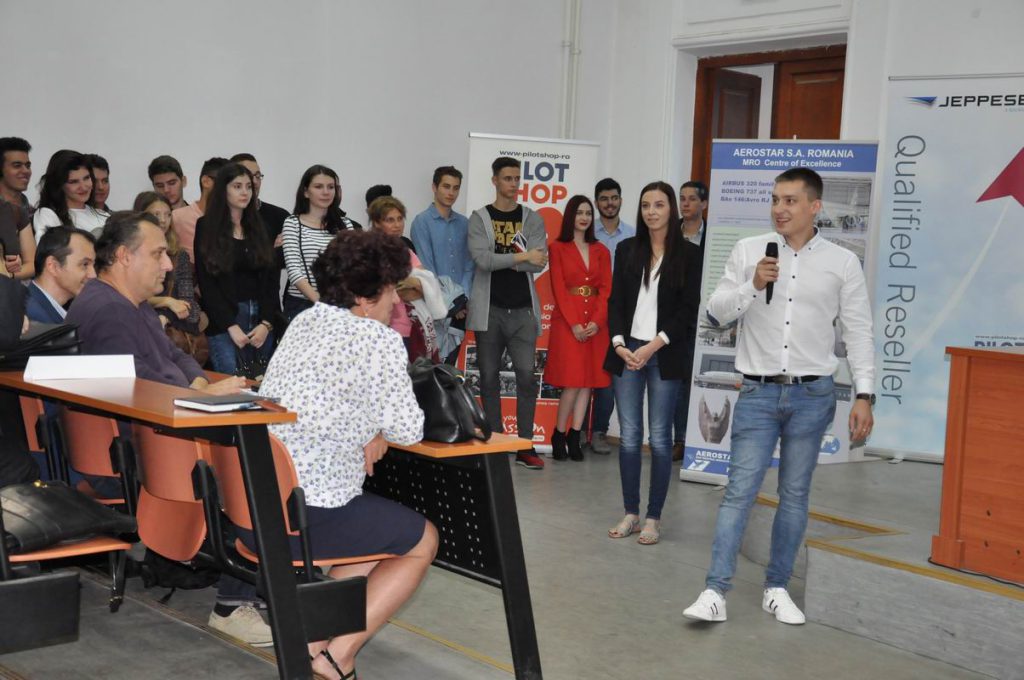 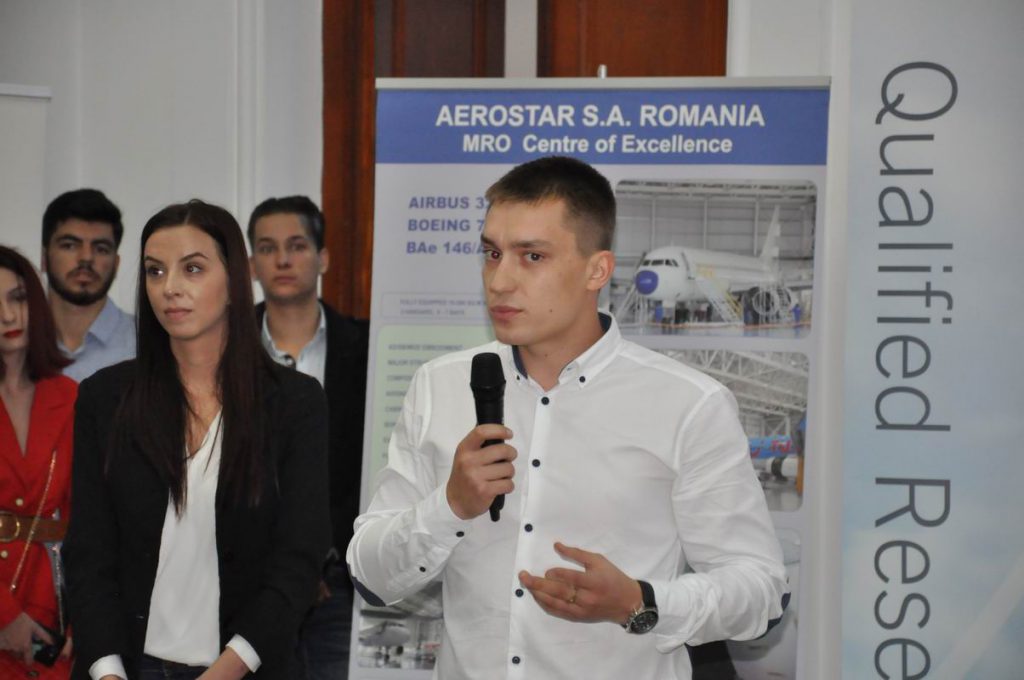 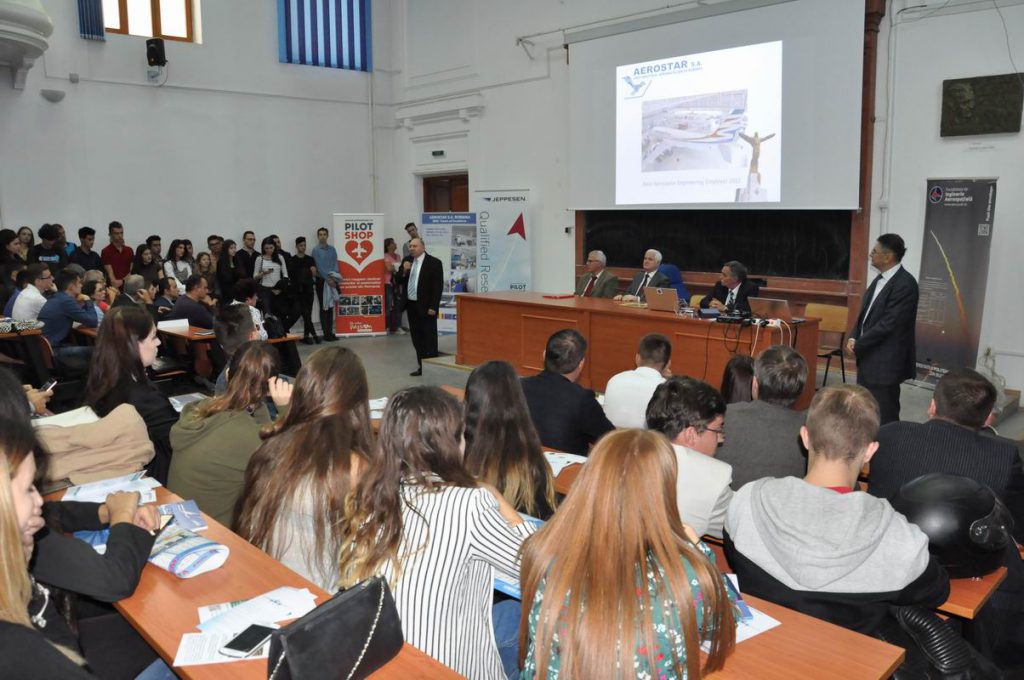 Next the floor was taken by Mihnea Gall, performance scholarship student in the 4th Year at Propulsion Systems, in the name of the Space Pirahnas team of UPB-FAE, who got the Airbus Safran 2017 Prize in Paris at Le Bourget in June 2017. This prize at the first participation of the faculty in a large European competition reveals a special recognition of the value of our school internationally. Also, the prize catches the expansion of the field of astronautics, in scientific research and technology development. In these, the Faculty of Aerospace Engineering in fully engaged. In his speech, Prof. Adrian Stoica also emphasized the high dynamics of this field, and Prof. Sterian Dănăilă indicated the opening of the Holistic Space Systems master program with free tuition places. 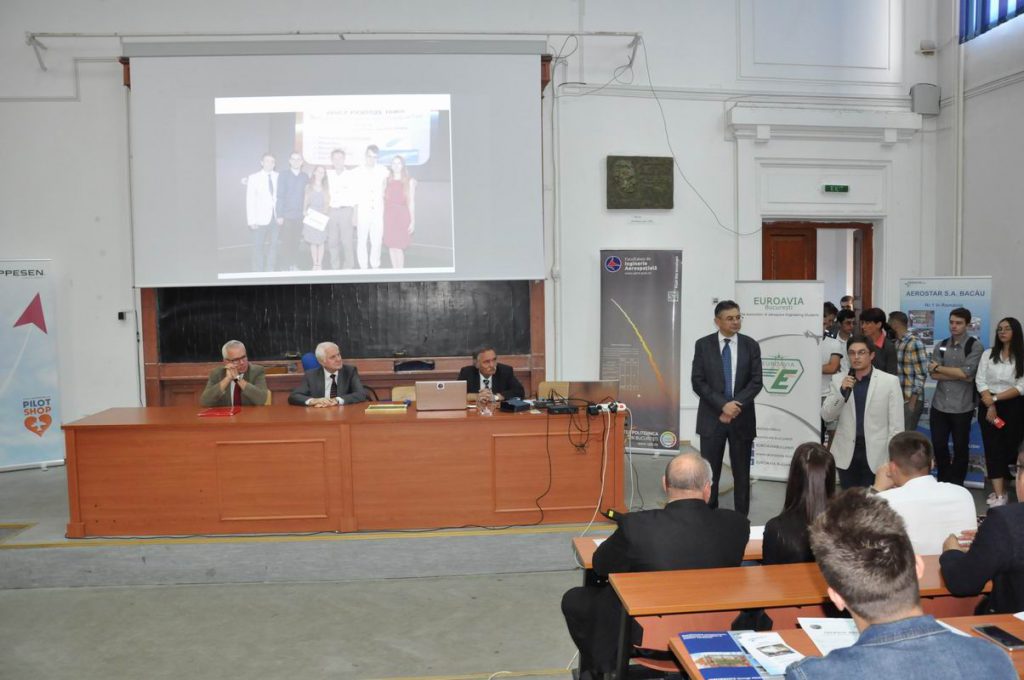 Dean Assoc. Prof. Octavian Thor Pleter mentioned a few remarkable events of the past university year: signing of the Partenership with Fokker Engineering Romania, which resulted among other things in the Fokker Academy program; the visit of the Air Canada President, Călin Rovinescu on the occasion of receiving the title of Doctor Honoris Causa of the University Politehnica of Bucharest, new major investments in the Romanian aerospace industry (Airbus Helicopters și Sonaca).

Flying Practice in the 2nd Year was reintroduced in 2017, after 25 years of interruption, with help from the Ministry of National Education and Aeroclubului României. The Dean compared his stage of flying practice from 1983 on IS-28 M2 motor gliders with the 2017 flying practice on IS-29 D2 gliders. Both were designed and manufactured by  Eng. Iosif Șilimon, a remarkable graduate of the Faculty of Aerospace Engineering. The Dean will look for financial resources to make the flying practice to continue in the following years. Also, together with Director Dan Paul Mălin Popa, we hope that Romanian-designed Romanian-made aircraft will resurface in the future, which would try to match the international success of the IS aircraft built at ICA Ghimbav Brașov.

The Dean mentioned the faculty tradition also through the photo which repreents the same amphitheater Virgil Constantinescu F024 in May 1931, on the occasion of the inauguration of the Faculty Wind Tunnel.

Prof. Sterian Dănăilă in his intervention insisted on the exigence level in aviation, and on the special responsibility associated with the profession of aerospace engineer.

Next, the company Jeppesen – Boeing through Sascha Neusser announced a competition for students, to use the E-Academy platform belonging to that company, world leader in air information services. The competition targets the FAE students, who may enroll as soon as a certain e-mail address will be published on this site. After the selection of 30 students, an on-line training process will follow and those students with the best results will be gratified with flying hours at the RAS Tuzla Fly School as a start into achieving the PPL (Private Pilot Licence). 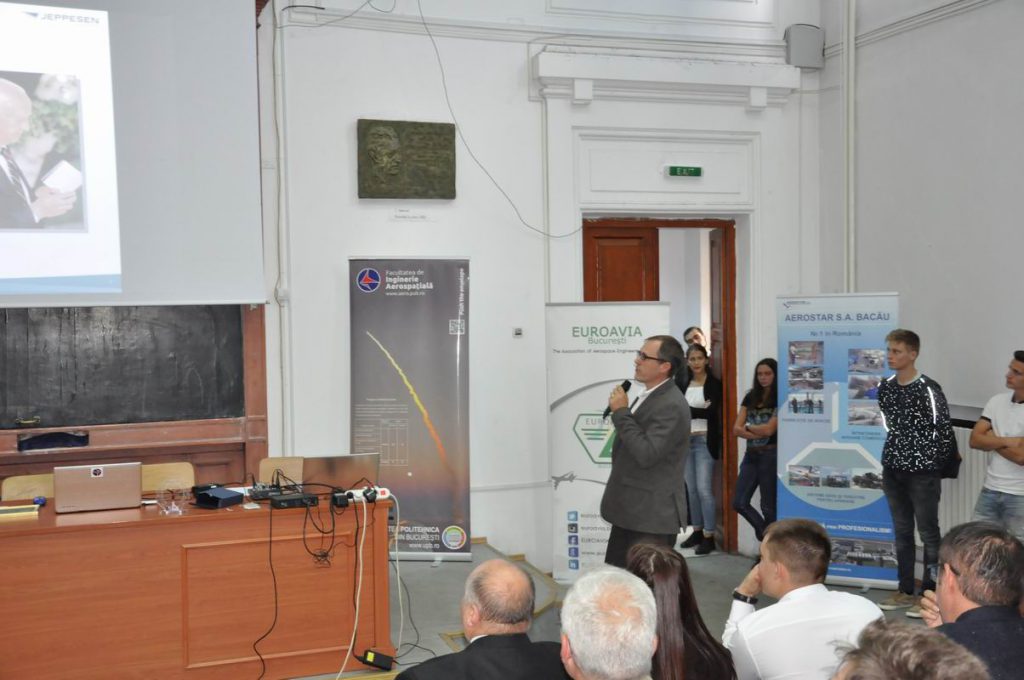 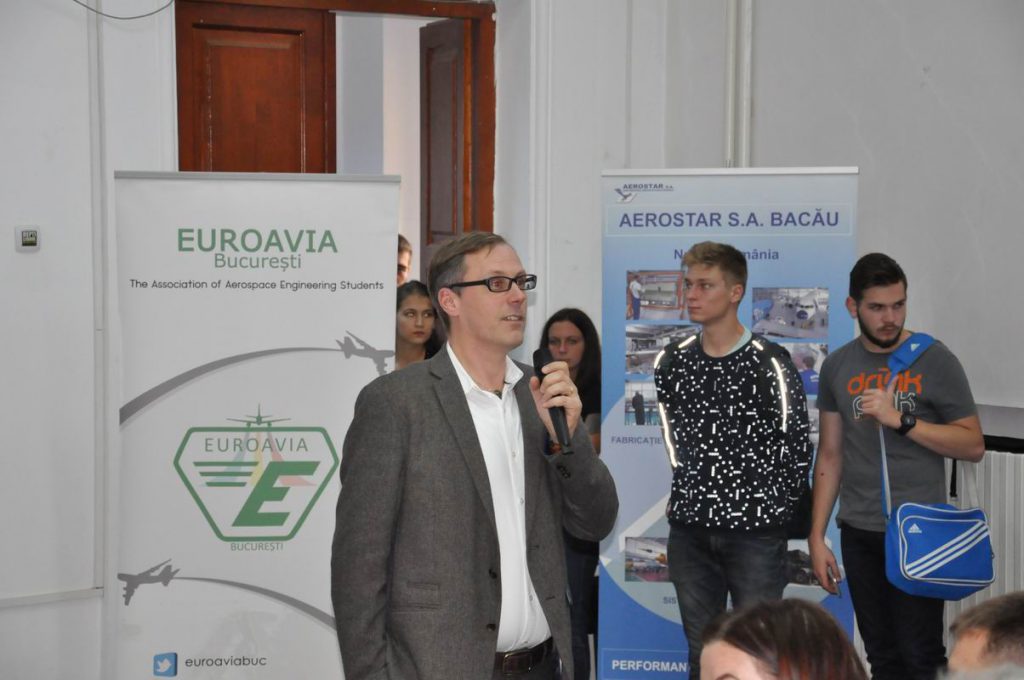 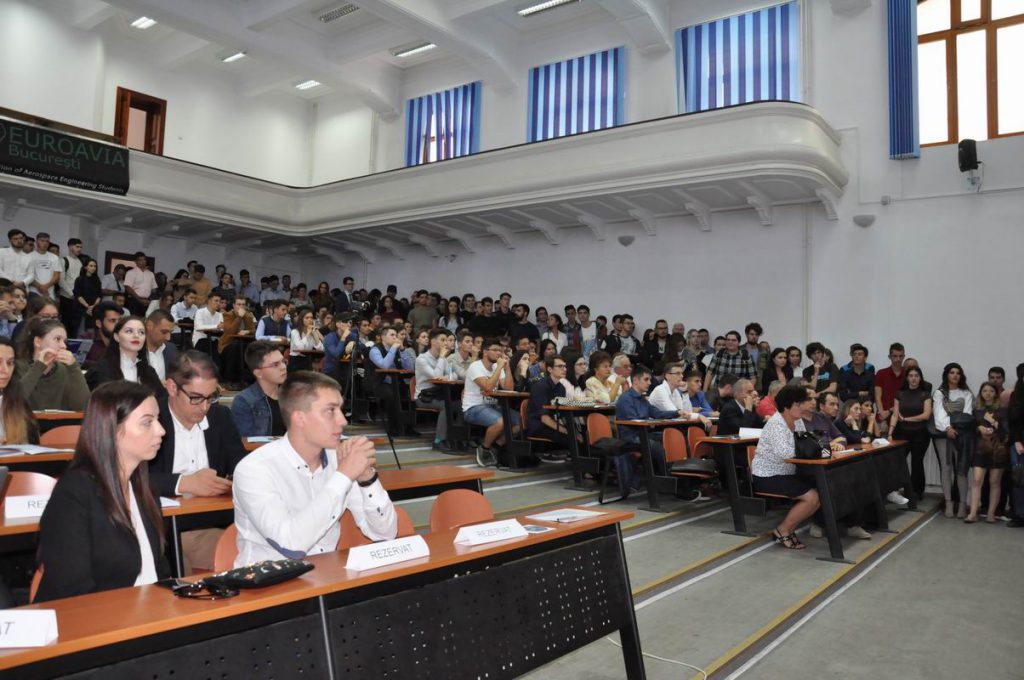 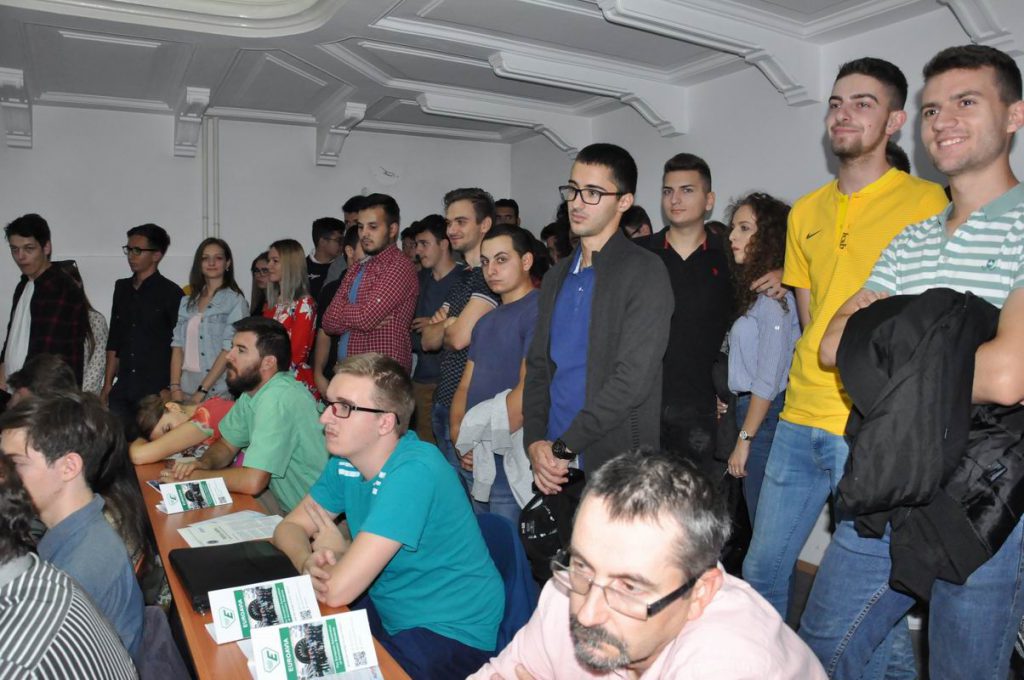 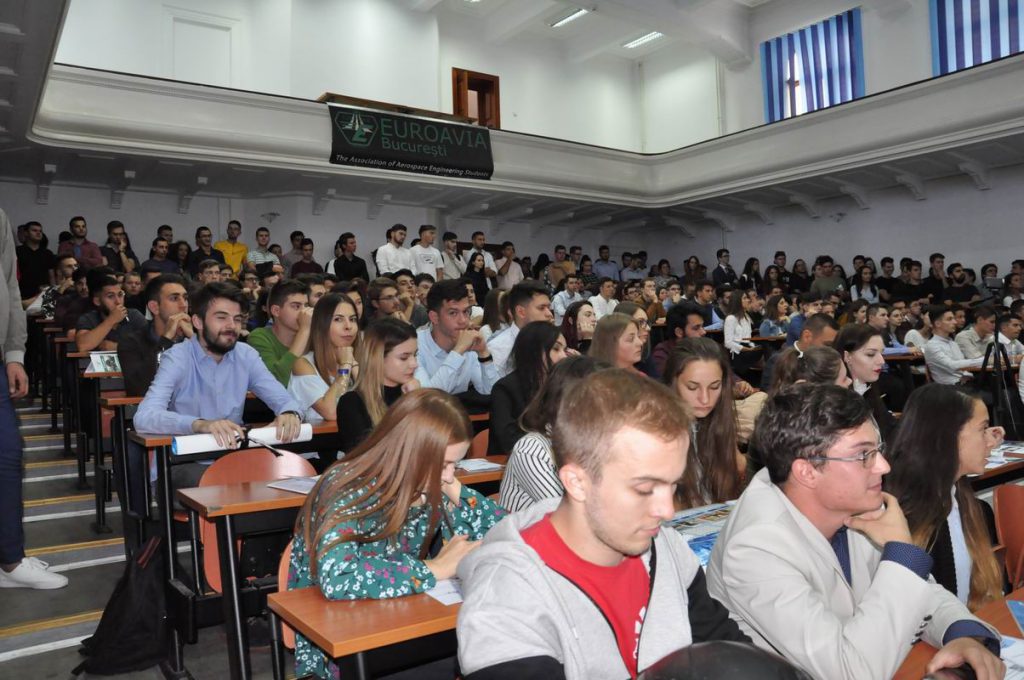 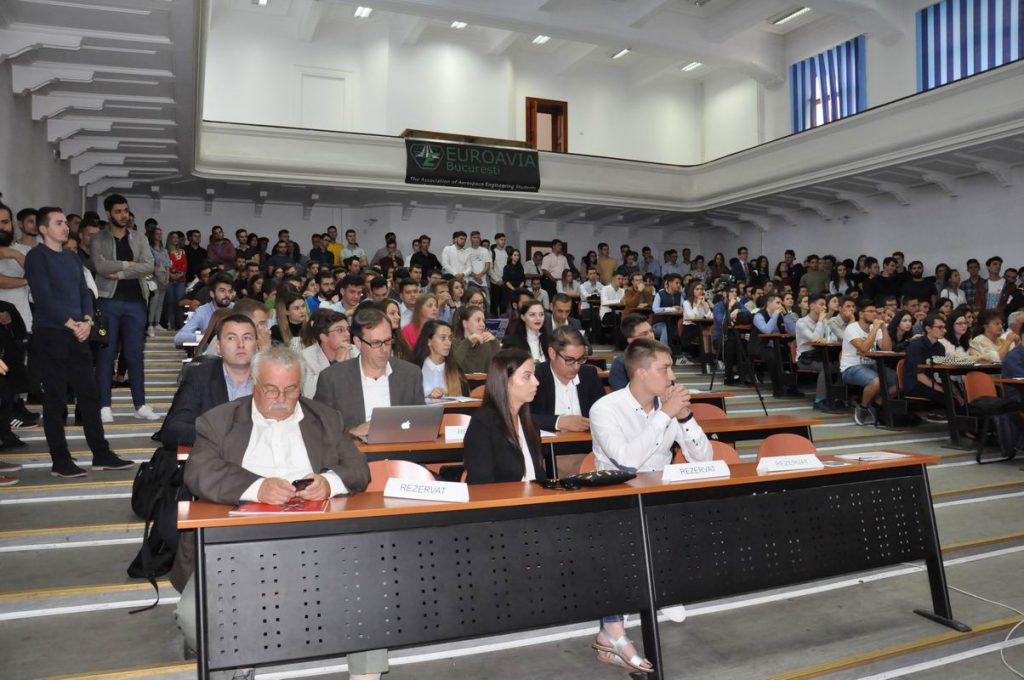 Ing. Sorin Roșca, alumnus of the Faculty of Aerospace Engineering presented next another competition for the students, a technical creativity contest, with important cash prizes, organized by AROPA (Romanian Association of Aviation Operators). Information on this competition may be downloaded <herei>. 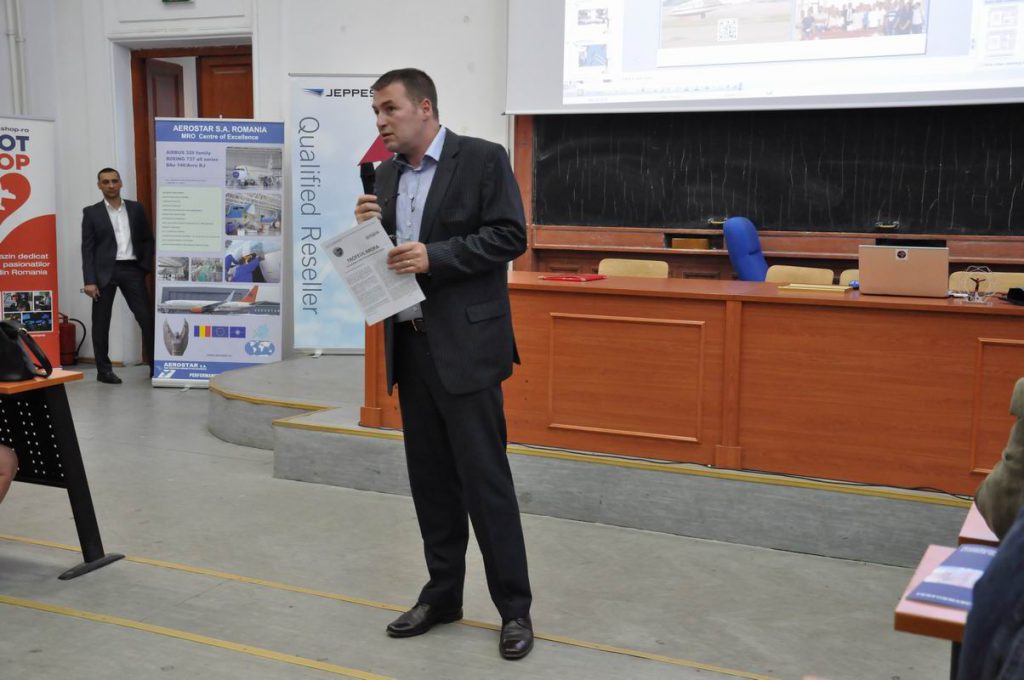 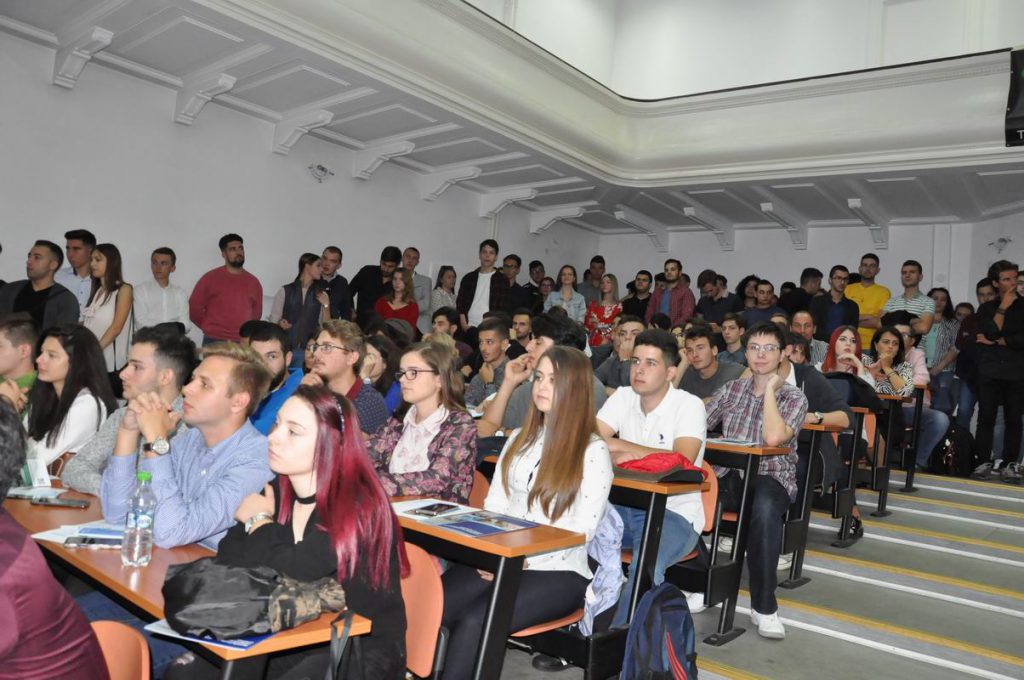 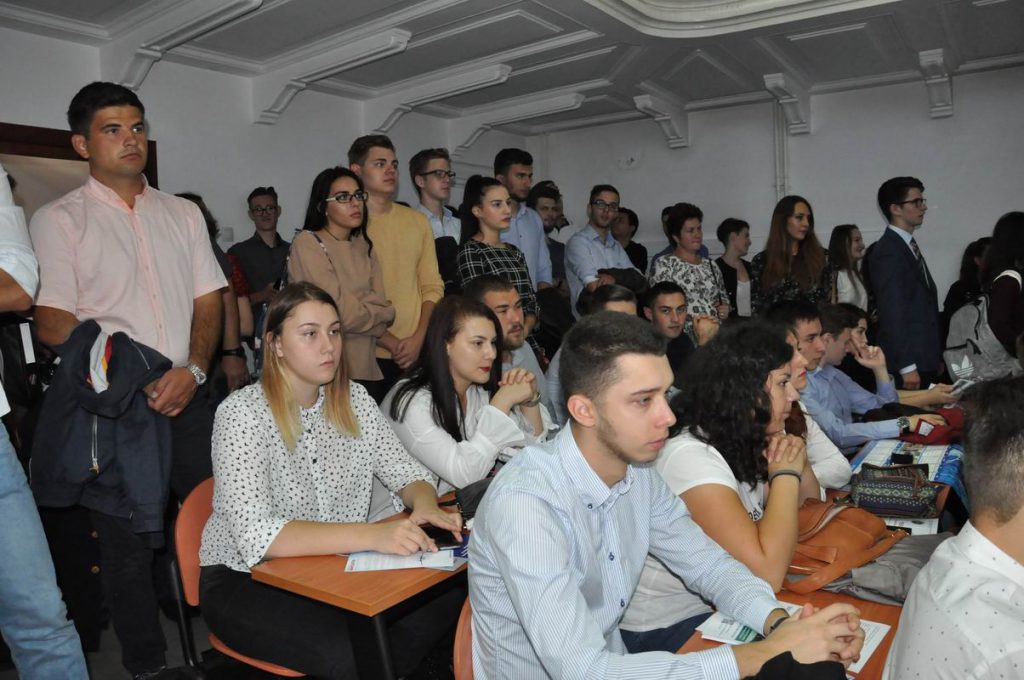 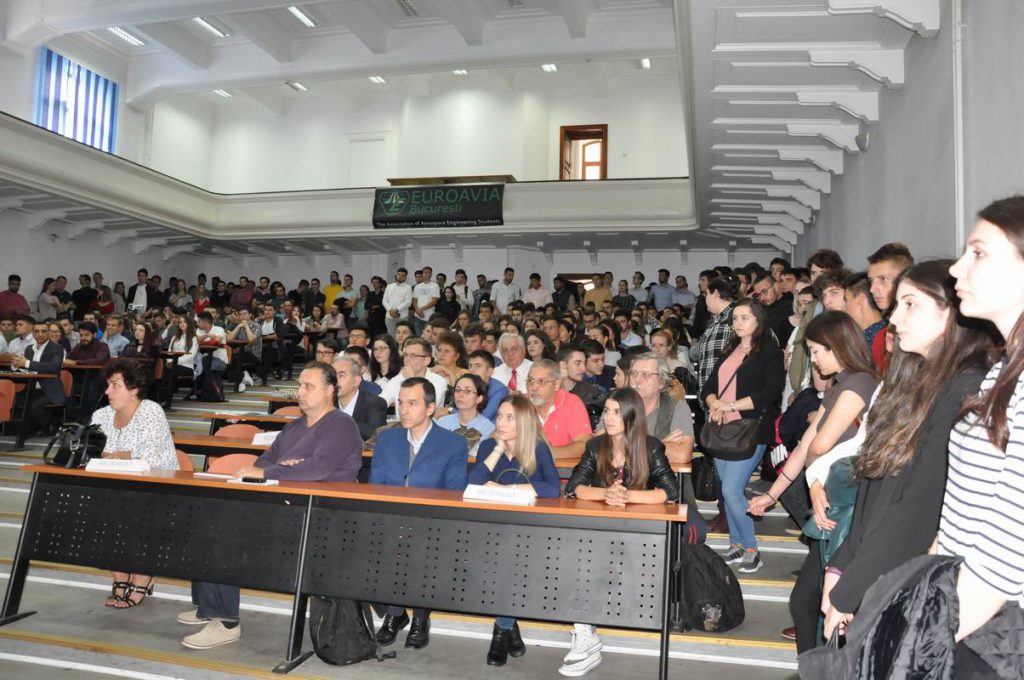 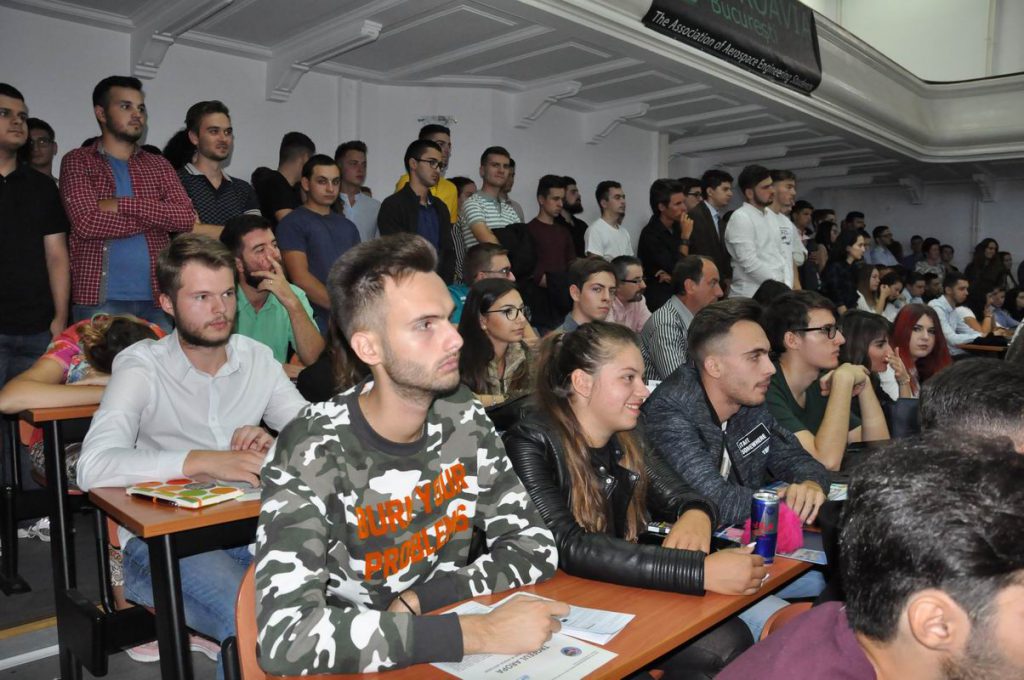 The session presentation may be downloaded <here>.

In the end, the student Rareș Bișag made a short, yet fascinating presentation of  Euroavia București, the European association of aerospace students, which is active in University Politehnica of Bucharest, Faculty of Aerospace Engineering since 1991. 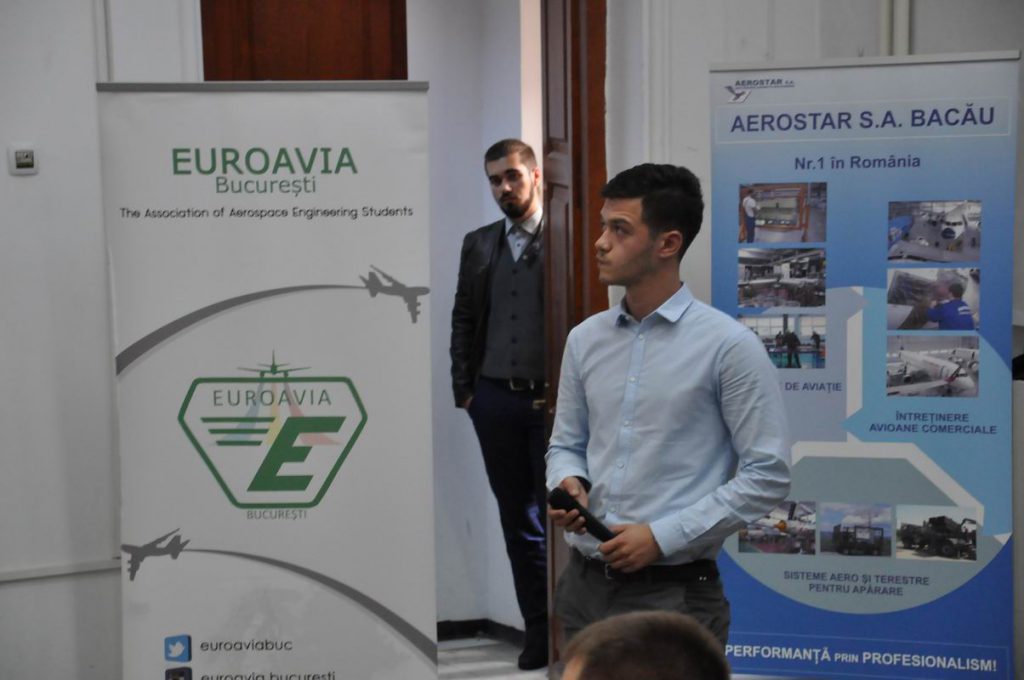 We thank firstly to the students for participating in such great number, we thank the distinguished guests, we thank to the professors, who equally honored the event in large numbers. SPecial thanks to our sports professor and photo addict Liliana Becea, who did the photo coverage of the event. Good luck in the new university year!