Romania has a strong aeronautic tradition dating back to the beginning of the 20th century. In the early days of aviation, three Romanians left their mark on the world’s aviation history: Traian Vuia, Aurel Vlaicu and Henri Coandă. All three of them built original aircrafts, showing remarkable innovating potential, way ahead of Romania’s economic possibilities. With such pioneers in aviation it is perhaps no coincidence that in 1938 Romanians quickly managed to build a fighter aircraft that became famous, and could compare with the best of the world at that time. It was called “IAR 80”.

Mircea Grossu-Viziru (born 1903  in Viziru, Braila, deceased in 1980 Long Beach, Califorina), enrolled in the courses of “Ecole Technique d’Aeronautique et Construction Automobileˮ in Paris; in 1926 he became a diplomat engineer specialized in Aeronautics. The following year he returned to the country and was hired to IAR Brasov factory where he held the following positions:

February 1928 – March 1929 – Civil Engineer in the Office of Secret studies of the IAR cells factory;

March 1931- May 1932 – Chief of Manufacturing Workshops for series aircraft and prototypes;

May 1932 – November 1934 – The head of all existing workshops in the cells factory, including the air shed; he was also responsible for the flight tests;

Mircea Grossu-Viziru, worked at IAR almost the whole existence of the factory. Due to his professional capacity, he was well appreciated and quickly advanced up to the supreme position of General Manager. He was the author of several inventions and valuable projects implemented within IAR, but also in other aircraft factories in Romania and abroad. Between 1925 and 1961, he patented 10 valuable inventions: one in Romania; 4 in France and 5 in the USA. Among these we should mention the “Guns nacelle for aircraft” patent Ro.20588 / 1932-IAR also named Grossu Turret-IAR, mounted on the IAR Potez XXV aircraft, IAR-37; 38, 38 and SET-7K. Grossu-IAR turrets were exported in several countries such as France, Czechoslovakia, Poland and USA where he obtained the patent US.1.953.710/ 1934.

From the documents in the National Historical Central Archives and Military Archives, it appears that Mircea Grossu-Viziru is the author of the projects IAR-37, 38, 39 and IAR- 80.For the IAR-80 project, Mircea Grossu-Viziru was awarded the Military Virtute Order ,class III (Ordinul Virtutea Militara cl.III-a ).

We cite from the Official Monitor no.149/ July 1, 1939: “Viziru Mircea Grossu, Engineer, IAR. Employed for 12 years he went by through the whole chain up to the position of high responsibility as director of the cells factory. He executed the whole range of aircraft in our Aeronautics working successfully both for the planes under license and for the Romanian prototypes of which the last fighter IAR 80 is one of the brightest of our aviation equipmentˮ.

On August 21, 1944 while he was working at Caransebes where some departments of the of IAR factory were dislocated he was called up from the Air Minister Gheorghe Jienescu. At the Ministry of Air and Navy he was received by the Minister himself who, because of the events advised him to take his family and leave the country as quickly as possible. One of the following days, together with family and close friends he boarded an IAR SM-79B and flew to Turkey where he was met by some representatives of the US military, then he was taken to Brazil, and the United States. He was employed as an engineer at Martin Marrietta Aluminium Company until retirement, and then he held the position of technical advisor at the same company until the end of his life. During his career in the United States he was involved in many projects, being recognized in particular for the Boeing B-52 Stratofortress.

The IAR 80 was a Romanian World War II low-wing monoplane, all-metal monocoque fighter and ground-attack aircraft. When it first flew, in 1939, it was comparable to contemporary designs being deployed by the airforces of the most advanced military power. Production problems and lack of available armament delayed entry of the IAR 80 into service until 1941. It remained in frontline use until May 1945.

Production of the IAR 80 started immediately, although the armament proved to be a serious problem. The prototype had mounted only two Belgian-made Fabrique Nationale 7.92 mm machine guns, a licensed modification of the Browning .30 cal. This armament was not heavy enough against modern aircraft, and the production model was expected to mount six. The German invasion of Belgium in 1940 suspended the supply from FN, and there was no suitable replacement. Lacking armament, production was halted. The Germans only allowed the delivery of the guns to resume after Romania joined the Axis in November 1940. As a result the first production IAR 80 didn’t roll off the line until January 1941, although the first batch of 20 were delivered by the middle of February. The armament supply remained inadequate so production models only carried four guns.

By April 1941 the Romanians were firmly in the German sphere, and as a result the Germans released more FN guns for their use. These were quickly installed, and the resulting 80A model finally mounted the original complement of six guns. Armored glass in the windscreen, seat-back armor, and a new gun sight were also added at the same time, along with the newer 1,025 hp (764 kW) K14-1000A engine. The extra engine power proved to be more than the fuselage structure was designed to handle, and it had to be reinforced with a duralumin “belt” just behind the cockpit in the first 95 A series aircraft built before the fuselage could be modified. 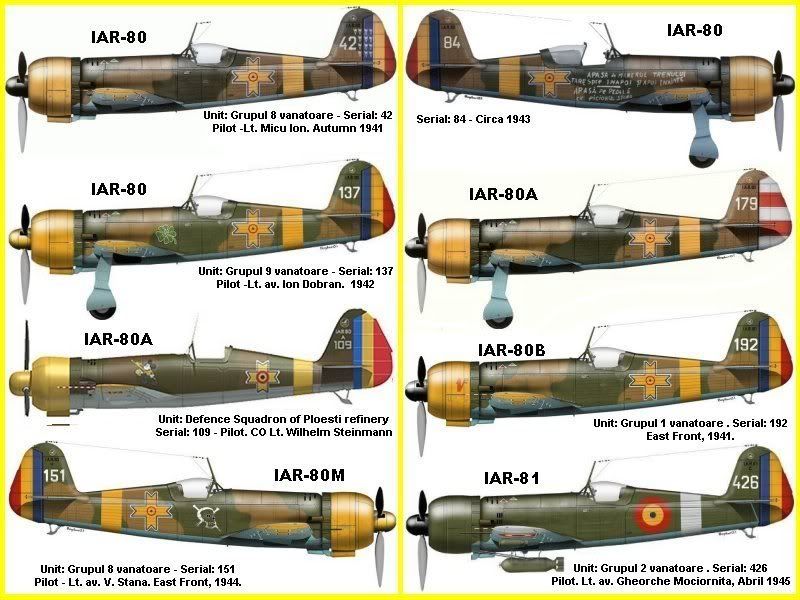 Operation Tidal Wave was an air attack by bombers of the United States Army Air Forces (USAAF) on nine oil refineries around Ploiești, Romania on 1 August 1943, during World War II. It was a strategic bombing mission and part of the “oil campaign” to deny petroleum-based fuel to the Axis. This mission was one of the costliest for the USAAF in the European Theater, with 53 aircraft and 660 aircrewmen lost. It was the second-worst loss ever suffered by the USAAF on a single mission and its date was later referred to as “Black Sunday”.