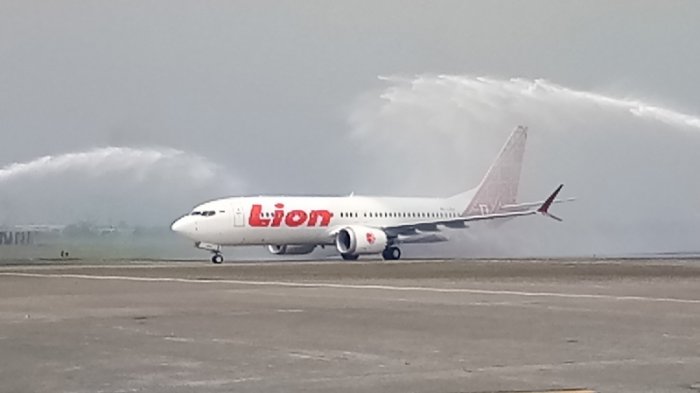 The 29th of October 2018 stood up in recent aviation history as the day the unexpected occurred -a brand new Boeing 737 MAX 8 crashed into the Java Sea.

Lion Air Flight JT610, operated by a 3-month-old PK-LQP (MSN 43000) FF 30/7/18, departs from Jakarta, Indonesia, runway 25L, at 23:21 UTC (06:21 local time), bound for  Pangkal Pinang. On board, there are 181 passengers and 8 crew members. With an estimated  time  en-route (ETE) of around 90 minutes, this looks like a usual domestic  flight. Two minutes into the flight, the plot from flightradar24.com  shows a drop in altitude from 2150ft to 1600ft and increase in speed to 334kts G/S. Three minutes after take-off, realizing something is wrong, the crew requests returning to Jakarta; ATC granted the request. However, the aircraft turned to the North East heading out over the Java Sea and climbed to 5,400ft but not holding a steady altitude. It then descended over the sea and was lost from radar 12 minutes after departure. Nevertheless, the 2-month-old aircraft broke up and sank on impact. The first “blackbox” was raised on 1 Nov from -30 m into the sea. Investigation is underway.

What could stand as the cause of accident?

The hypothesis of unfavorable weather or false horizon, optical illusions and disorientation at twilight (see Ethiopian Flight 409) could be dismissed, as there was full daylight and the data extracted from METAR (WIII 282330Z 16003KT 8000 SCT020 27/25 Q1010 NOSIG) show good conditions – wind with 3Kts velocity, scattered clouds and good visibility.

With only 800 km covered during commercial service, any mechanical issue is hardly believed to exist. Nevertheless, the aircraft did have a technical problem on its previous flight. It is not yet known whether it was related to the accident.

As aircraft operation depends on glass cockpit systems, flight crews must be trained to deal with possible failures. It is believed that a blackout may have appeared during the flight, with pilots unable to regain control. Lion Air being a banned airline by EU until 2016, due to training and maintenance concerns, such cause is not to be ignored.

Another hypothesis could be the hacking of the system, since in 2016 only there were more than 50 reports of GPS interference at Manila International Airport – which can lead to “missed approaches” forcing flight crews to re-approach the runway using backup navigation systems, this paving up ways for further  cyber-security improvements in aviation.

The next plausible assumption could regard fuel contamination, which may be caused by a foreign substance entering the tank, such as water which develops microbial growth, or by degraded fuel and improper fuel in the tank. Pollen, rust, rain, petroleum products are also possible sources of contamination. The „healthy” state of the fuel in the tank is a very important aspect which has to be taken into account accordingly because it affects all the flight parameters, as well as the engine. The worst thing is that, if contamination was indeed the cause of the crash, it may not have been evident until after the aircraft had become airborne. However, the fuel is drained everyday in order to remove excess water formed by condensation  in order to minimize the risk of developing a microbial environment.  Even when taken out of bulk storages and uplifted to aircraft, the fuel is filtered to ensure that no water or other substances are present in the fuel.

How should the issue of fuel contamination be handled? Airport fuel supplies and the maintenance team should respect the norms and procedures of decontaminating and checking the optimal state of the fuel to ensure a normal and safe flight. As for Lion Air Flight JT610, the possibilities stated above are relevant for our case study.

Moreover, another assumption is associated with the failure in the urgent manual landing procedure of the aircraft. Nowadays there is a lack in the manual landing training systems for the pilots, because of the existing autopilot and autoland   procedures. However, manual landing is supposed to be used only when it is imperative that it should be and if poor weather dictates so. Furthermore, it is very unpleasant to use this type of  landing because it requires monitoring from the ground which means more money spent for the airline company. The pilots in this case had a good chance to land properly on the shore of the Jakarta Island.

Another scenario exploits the possibility of engine failure, which is highly unlikely given the facts. The hypothesis of such a major technical failure occurring in the case of both engines at the same time doesn’t really hold.  Had something happened to disrupt the proper functioning of one engine, then the second one, still running, would have ensured a safe return or at least a forced landing somewhere on the ground, especially if we take into consideration that in the critical moment, i.e. 23:31:23 UTC, when  Boeing 737 MAX 8 seems to have started manifesting a significant altitude loss, it was still very close to the shore.

Both engines failing at the same time isn’t plausible from other standpoint as well. In the event of total engine failure the next step would have been gliding, which in turn would have been visible on the trajectory of the plane, in the form of a steep turn (ideally of 180 degrees, but in reality just enough so that the airplane could get back on the ground safely). But this turn never took place, since it is obvious that Boeing 737 MAX 8 kept its initial trajectory.

If we were to consider the gliding rate of the plane a mean value of about 700 ft/minute, then an initial altitude of 5400ft would ensure at least 7 minutes of gliding, which would have been more than enough to safely reach the shore. Thus, taking all these facts into account, we could say that the hypothesis of engine failure remains highly unlikely. Into this category could also fall a presumed encounter of the aircraft with a flock of birds, for example.

Even if a technical issue seems to have been the main cause of this accident, there is also the possibility of an error regarding the piloting of the aircraft, which shouldn’t be neglected. One of the hypotheses seems to indicate that pilots may have exceeded the maximum speed specific to every type of airplane (never exceed speed), which would explain the sudden drop of altitude (from 5400 ft to 3700 ft) in such a short time.

The trajectory of Boeing 737 MAX 8, paired with its periodic reports on flight level (about every 1 minute), clearly show that the aircraft covered a significantly smaller distance in the minute right before the critical moment than it did in the next minute. This difference can only be explained by making the assumption that the velocity increased.

A strange aspect, nevertheless, is that at 23:33:21UTC, namely one minute after the huge altitude drop was noticed, the plane appears to have remained on the same flight level (FL 3700) and extremely close to where the previous report had been made. But,  increasing velocity to such an extent can be extremely dangerous and often times even fatal, because, during this  maneuver, parts of the airplane could be dislocated, leading to loss of control.

The main argument that supports this possible mistake is an error displayed by the speed indicator of the aircraft, most likely caused by a malfunction of the  Pitot  Tube, which indicates pressure. If pressure indication was faulty then pilots may have thought that they were flying with a dangerously low speed (when in reality there was no real issue to be addressed) and in return, they decided to increase it by diving and performing a so-called “flat spin” maneuver.

It would appear that we are pointing our attention towards a technical problem after all. So, in this case, could we still talk about an error regarding the piloting itself? The answer is yes! If this last assumption is valid then it is safe to consider that the pilots could have gotten over these technical issues, since even if the displayed velocity was abnormally low, the attitude and the angle of attack of the plane (displayed by the Attitude Director Indicator) had not suffered any significant change to account for such a dramatic drop in velocity. Hence, we could claim that it was possible for the pilots to notice the conflicting information and avoid this catastrophe.

To conclude, there is an undergoing investigation with respect to the accident of Lion Air’ 737MAX8 aircraft accident, which already pointed out that there is a possible anomaly with the angle of attack sensor input. Still, not a single aspect of the ones mentioned above can be the cause of such an accident, but each and every one can contribute to a fatal end.