The story of the Faculty of Aerospace Engineering is mainly the story of its students.

Daniela Andrioaie is a 3rd Year student of the Faculty of Aerospace Engineering, Aeronautical Constructions program of studies. She came to this faculty from a pretty long distance, from Comănești, Bacău county. She graduated high school there with 9.88 out of 10 average grade, the Theoretical High School ”Spiru Haret” in Moinești, sciences profile (mathematics – computer science). She defeated the distance and the difficulty of the admission out of passion for aviation. At the admission contest (written test at mathematics and physics) she got 9.57. She finished the 1st Year with an unusually high grade average for this faculty: 9.85. She spend her summer vacation flying at the Romanian Airclub and doing internship at Aerostar Bacău.

In the 2nd Year she got Performance scholarship in the 1st Semester (average grade 9.72) and merit scholarship in the 2nd Semester, earning 700 Lei/month. Given her academic records (scholarship average grade 9.38), in the 3rd Year she continued to get the merit scholarship. Since the 1st Semester 2017-2018 Daniela is away to study with one of the best aerospace engineering schools in Europe, the ISAE SupAero, in Toulouse, France, through an ERASMUS+ scholarship. Daniela writes in a message sent from Toulouse that ”it is very hard, but I am super motivated to study and I integrated very well among the French students. I totally dedicate my time to study, but I like it very much what I am doing” and she goes on ”I am happy for this opportunity to be here, and I ma grateful to the University Politehnica for this”. The claim that she is totally dedicating her time to study may be an exaggeration, since she joined the SupAero basketball team (she even got elected vice president Club basket), in the skydiving team and also continues her flying program, and the facebook profile photo shows a parachute jump of hers. 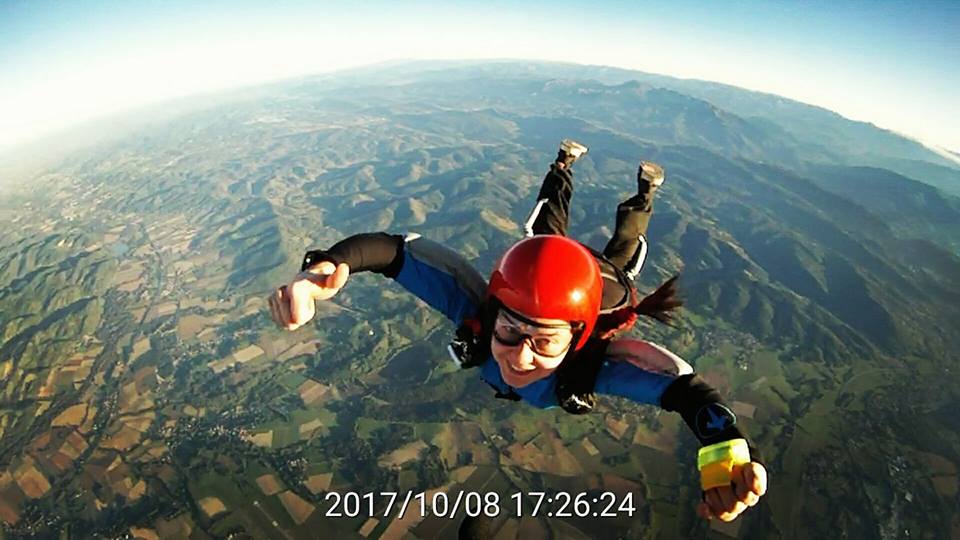 She got to the Student Council (BDE bureau des élèves), responsible of the school’s partnerships. On 16 of March 2018 she was selected to represent SupAero in Paris, for the largest military school competition in France (TSGED). We picked Daniela’s case to illustrate something relevant on the Faculty of Aerospace Engineering: here, as in the whole aerospace community, people love aviation and are passionate about what they are doing. That is giving them the energy to overcome the obstacles easy to imagine for such a difficult school. Like Distinguished Prof. Corneliu Berbente, Dean of this faculty between 1980-1988 and 2000-2004 used to put it: ”The eloquent motto of our Dean’s Office is that we rather fail a student than an airplane”. 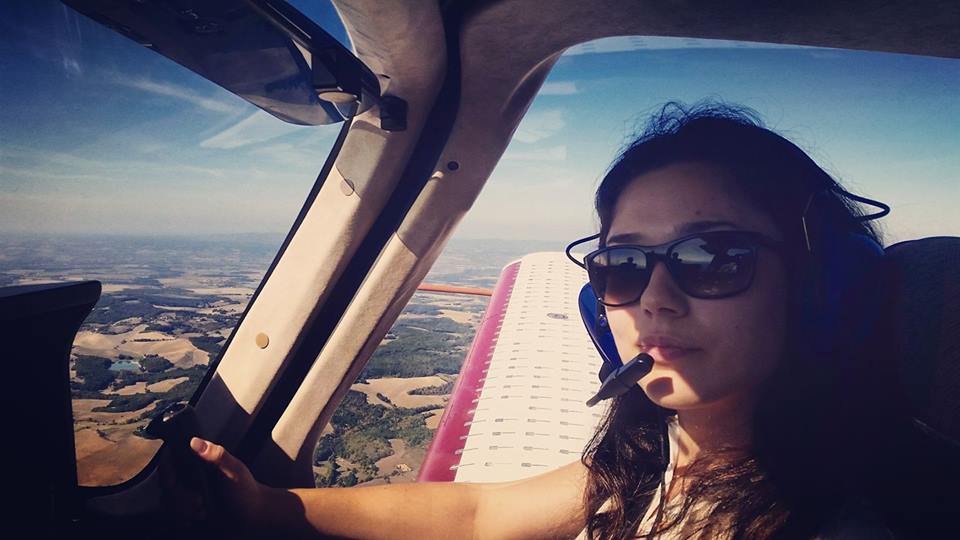 Another success story belongs to the 4th Year student Mihnea Gall, of the Propulsion Systems program of studies. He got performance scholarship of 1200 Lei/month. Mihnea is from Câmpina, where he graduated National College “Nicolae Grigorescu”, mathematics -computer science (science profile) with an average grade 9.91 out of 10. At the admission he got an average grade of 9.98 and in the 1st Year he managed the incredible average grade of 10! In the 2nd and the 3rd Years his grades were 9.88 and 9.94, making to the best faculty students league. 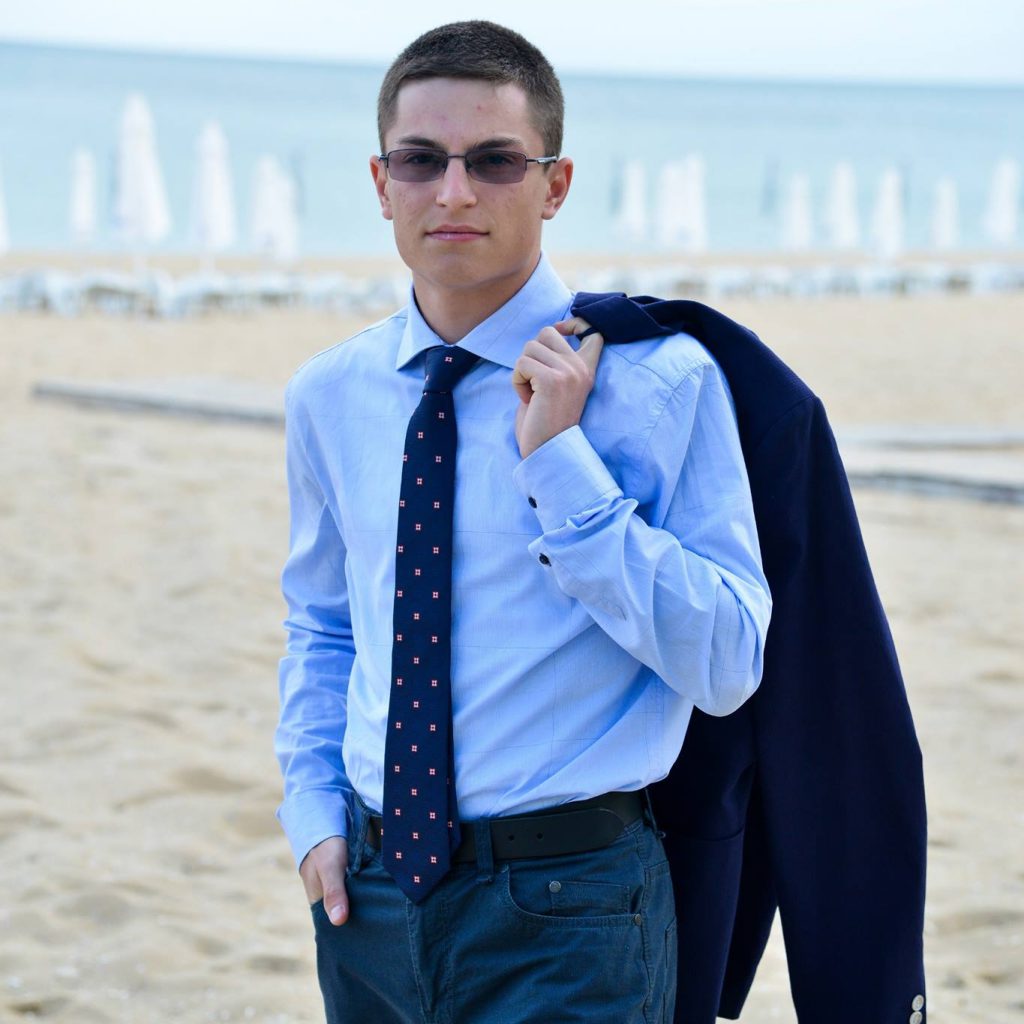 On 8 June 2017 at the Air and Space Museum of Paris Le Bourget, Mihnea Gall was the youngest member of the students team Space Piranhas of the Faculty of Aerospace Engineering, together with Sebastian Milu-Vaidesegan (team leader), Monica Manole, Sorin Păun and Adina Ungureanu. They won the prestigious prize Airbus Safran Launchers, awarded by the European Astronautic Club, with support from Airbus, European Space Agency, Dassault Aviation, GIFAS, Airbus Safran Launchers and Thales. In the Student Aerospace Challenge, the participants were aerospace engineering students from large European university centers, from Spain, Portugal, France, United Kingdom, Italy and the Netherlands. This prize rewards the passion the the creativity of our students, but also the performance and the tradition of the Romanian school of aerospace engineering. 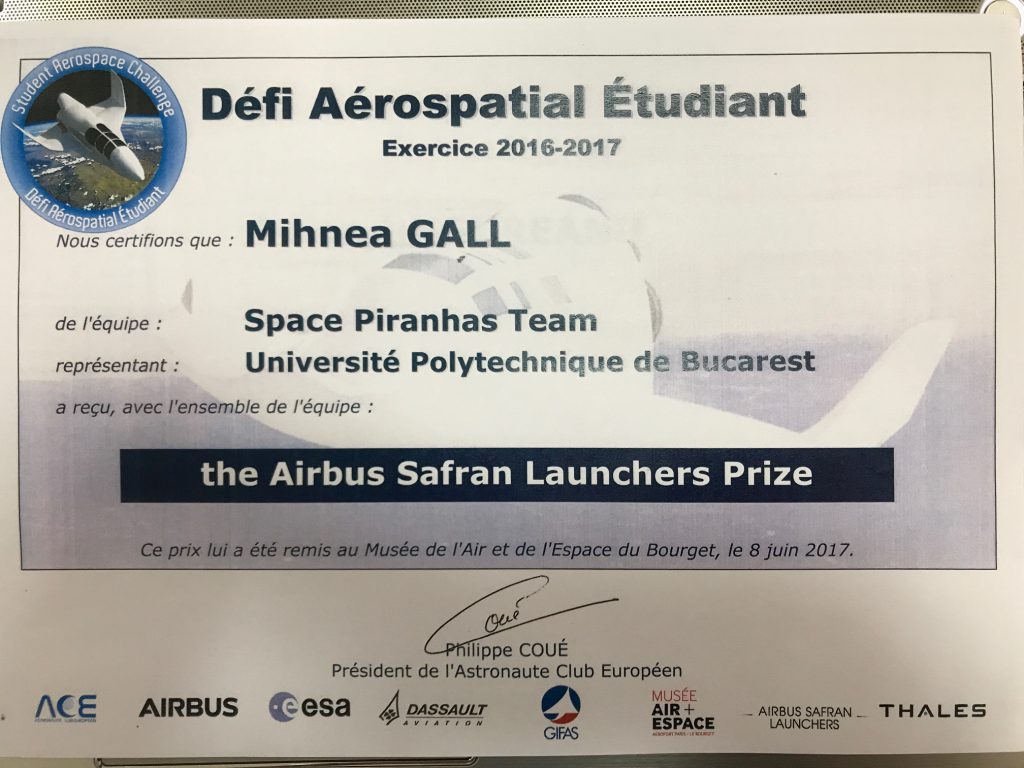 The paper which got our students the first prize was on redesigning an launcher engine for a suborbital flight. The event catches the booming dynamics of this field of scientific research and technology development: astronautics, where the Faculty of Aerospace Engineering is fully engaged. Since 2011, when Romania became a full member of the European Space Agency (ESA), astronautics started to play an important role in Romania, both through ESA research and development programs, and through the opening of branches of space technology Hi Tech companies, such as GMV Spain, HPS Germany, Deimos Portugal, and also the expansion of the Institute of Space Sciences in Măgurele. 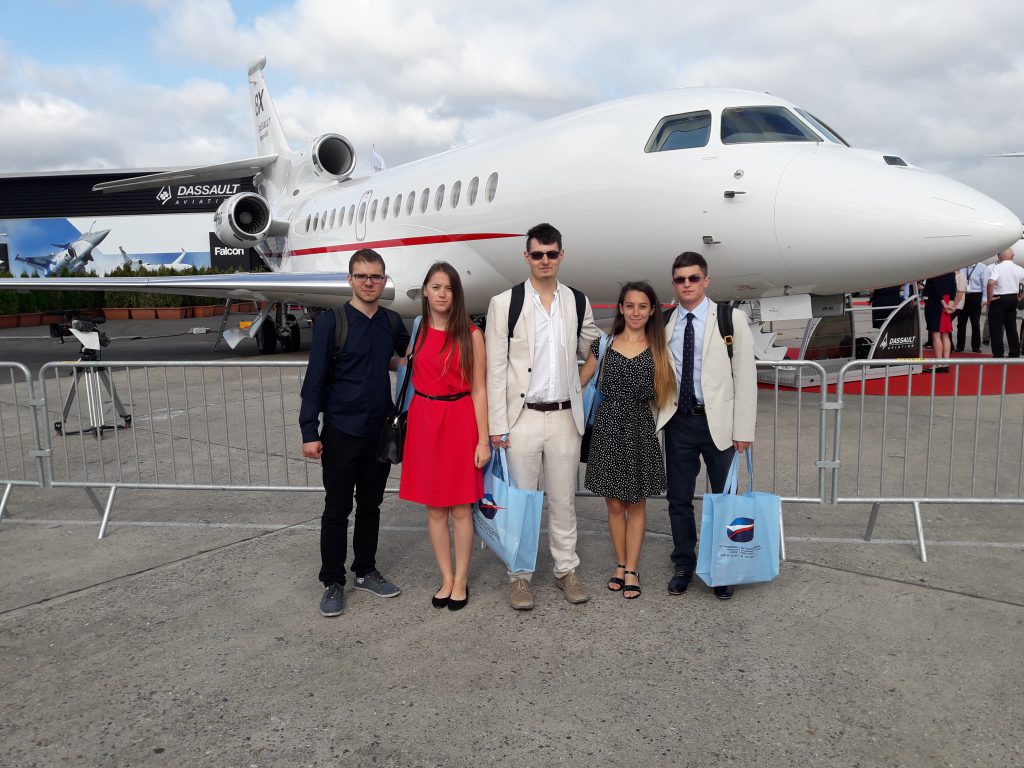 There were more significant events in the last year in the Faculty of Aerospace Engineering, such as signing of agreements with Fokker Engineering Romania, with Romanian Aviation Academy and with EUROCONTROL, starting of Fokker Academy practical training, the Best Aerospace Engineering Employer Award won by Aerostar SA Bacău, the CEAS Conference of the European researchers in aerospace engineering, organized for the first time in Bucharest, and internship agreements with the most relevant 30 aerospace organizations in Romania, plus 7 abroad. However, if we were to pick just a single event, it is the one illustrated below: the first flights of the students after 25 years of interruption of flying practice, on 27-29 August 2017, at Clinceni Aerodrome. This was made possible with funds from the Ministry of National Education for students extracurricular activities, with the help of the Romanian Airclub and the European aerospace students organization Euroavia, the Bucharest branch. Flying practice in the Year II summer has been a tradition of this faculty since the beginning until the 90s, when it was abandoned due to very high costs. For the faculty, reconnecting with this tradition was perhaps the most significant event. It matters a lot to an aviation engineer to take the stick in his / her own hand, to understand the difficulty of flying, to feel directly the emotion and the fascination of flying. 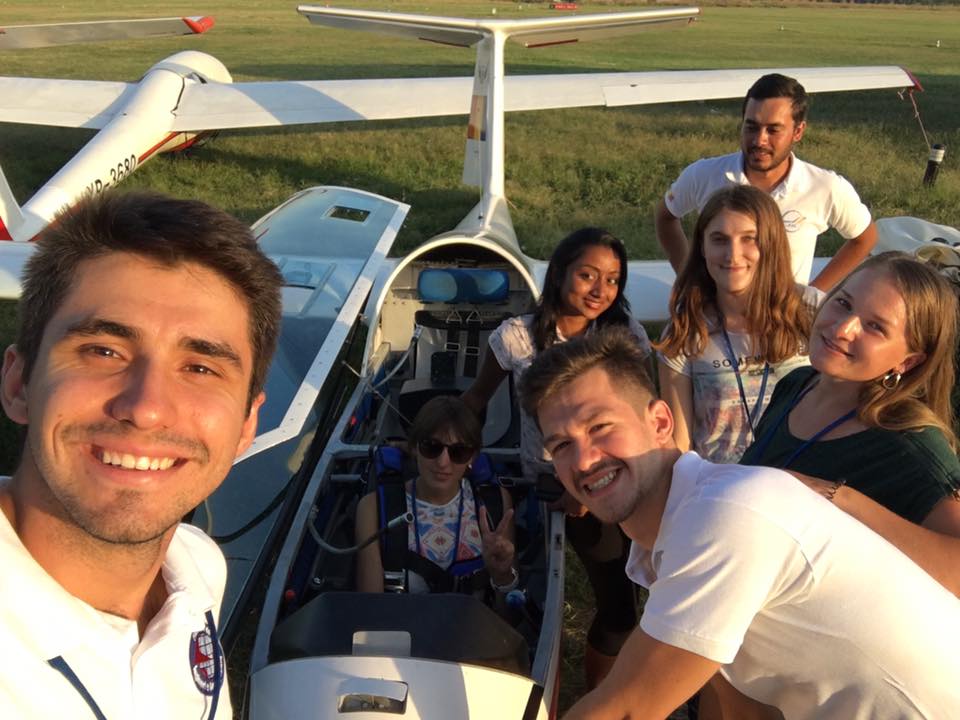 What does the future offers to these well trained, valuable, passionate young future engineers? The aerospace constructions industry in Romania is steadily growing since 2014, from Euro 300 mil. turnover to 500 mil. that is over +20% annually! It is one of the fastest growing sectors of the national economy. The new investements exceed Euro 70 mil. (Airbus Helicopters Brașov, Sonaca Moldovenești, Cluj). Also, Aerostar SA Bacău started to invest in their new plant in Iași, which will start production in 2021. The Romanian air transport industry approaches Euro 1 billion, the airports showing the greatest dynamics, averaging over +20% annually. A considerable number of engineers work in this industry, which includes the maintenance and repair divisions of the airline operators. The aviation branch of the military industry, including on-board and ground aviation equipment is also promissing to soar, more acquisitions being announced from the 2% national GDP defence bill. These acquisitions are done with offset, and consequently this sector will soon need these passionate and motivated young aerospace engineers.