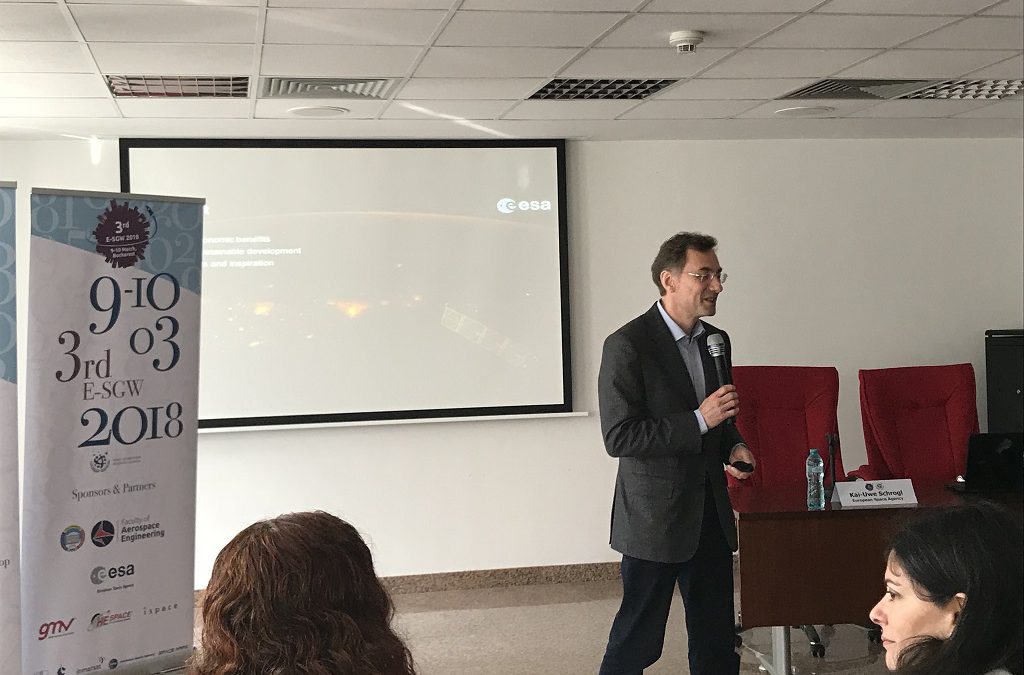 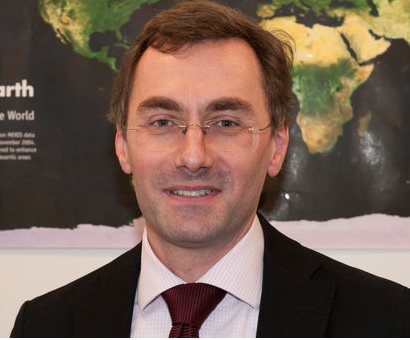 Prof. Dr. Kai-Uwe Schrogl, Chief Strategy Officer at the European Space Agency (ESA) addressed the young community of the space generation at the 3-rd European Space Generation Workshop (SGAC), which took place in Bucharest, on 9-10 March 2018. This is an advisory council to the UN for space and perfectly understandable these days, it is not an old men council, it is a young people council instead. He asserted his receptivity to the young people’s aspirations in this stage of space explorations, codenamed Space 4.0, which is a one of international participation, and young people have an essential role in defining the priorities and the targets to reach in the next decades. Among these young people, we were pleased to find a significant number of students of the Faculty of Aerospace Engineering, which also hosted the event. The Romanian Space Agency ROSA kindly sponsored the young Romanian participants with the fee. Prof. Dr. Kai-Uwe Schrogl accepted out invitation to speak to the academic community of the Faculty of Aerospace Engineering, University Politehnica of Bucharest. The date will be announced later. 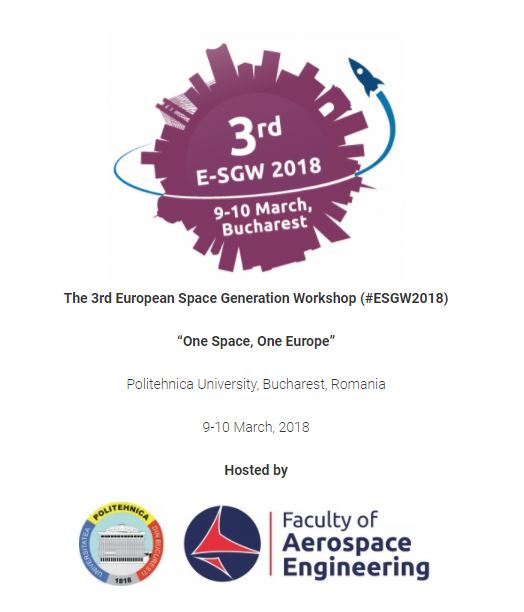 Also on behalf of ESA, Christina Giannopapa, Head of the Political Affairs Office (second from the left in the photo below), Maria Gabriella Sarah and Caroline Thro were present. 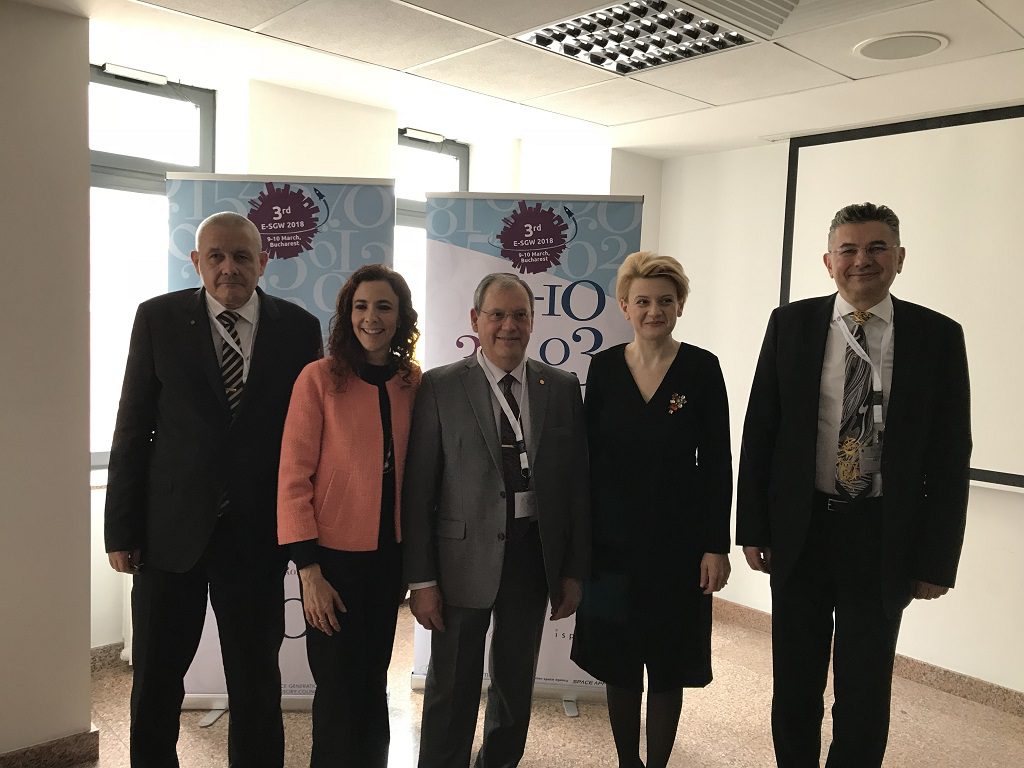 The event opened with the speech of Dr. Marius Ioan Piso, President and CEO of the Romanian Space Agency – ROSA (left) and Gabriela Melania Ciot, Secretary of State in the Romanian Ministry of Foreign Affairs (second from the right).

Dr. Marius Ioan Piso explained his vision on Romania’s space development, through growing of excellence centers in different areas. This growth follows a very accelerated dynamics for Romania in recent history, and that owes to Dr. Piso. There are huge steps made by Romania since the 90s, topping with the acceptance of our country in 2011 as the 19-th full member of ESA. We are proud that the Faculty of Aerospace Engineering of the University Politehnica of Bucharest, other sister faculties and our Center of Research for Aeronautics and Space occupy a central role in the ROSA stategy.

In my capacity of Dean of the Faculty of Aerospace Engineering (right), I conveyed our message to the young generation of future space explorers. I mentioned that we are involved in a number of research projects of the European Space Agency through the Center of Research for Aeronautics and Space, but in the same time we ”supply” engineers and researchers qualified for the challenges of the frontier of knowledge. We were otherwise surprised in the most pleasant way that a lot of space industry representatives present at the event were our Alumni. 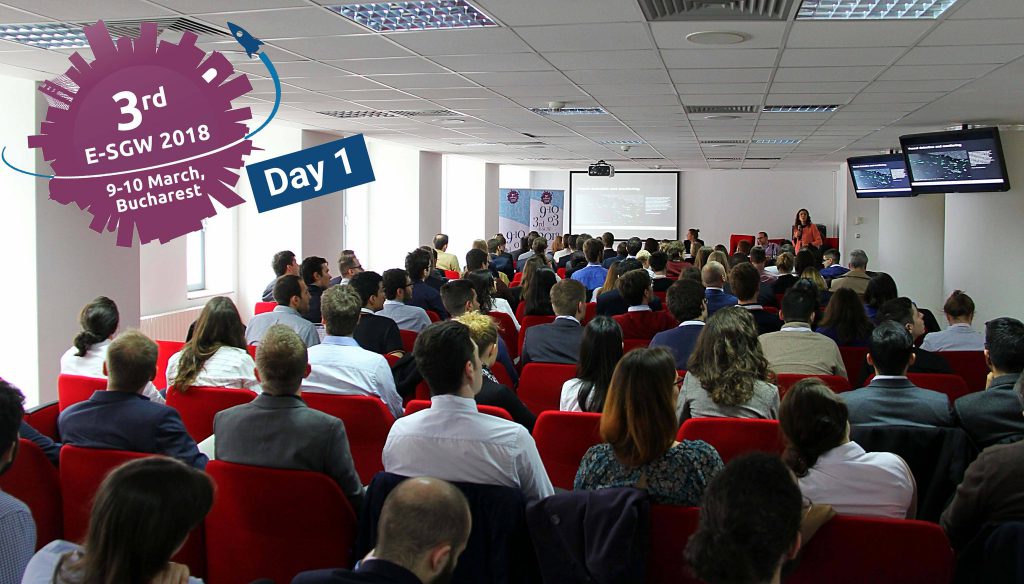 It does not seem an exaggeration to say that probably saving our planet from potential cosmic, environment or climate catastrophes depend on the power of this new generation, the space generation. Like aeronautics, the astronautics exert a phenomenal fascination and in the same time attracts people who are particularly courageous, full of character and admirable. You may be attracted to this field not only by challenging the limits of exploration, but also by joining a human community of outstanding quality. As an exponent of the elite of this community, Cosmonaut Dr. Eng. Dumitru Dorin Prunariu had a very applauded presentation. We take pride in the international appreciation of Dorin Prunariu, and Alumnus of Honour of the Faculty of Aerospace Engineering. About him I wrote once: ”We are 6 billion people on this planet. Only the best 600 have been selected to be astronauts. You got 1 in ten million chances to be that perfect!” Together with Dorin, I mentioned Hermann Oberth, as it seemed appropriate that the future space explorers, some for the first time in Romania, to hear that one of the space flight pioneers was Romanian.

Another Romanian contribution belongs to the space lawyer Virgiliu Pop, ROSA researcher, responsabile of ESERO program (photo). He co-founded SGAC in 2001 and author an important book in the field: ”Who Owns the Moon?” published in 2008 at Spinger. The problem of the extraterrestrial mining will be a pregnant one in the next decades, especially under the legal perspective. 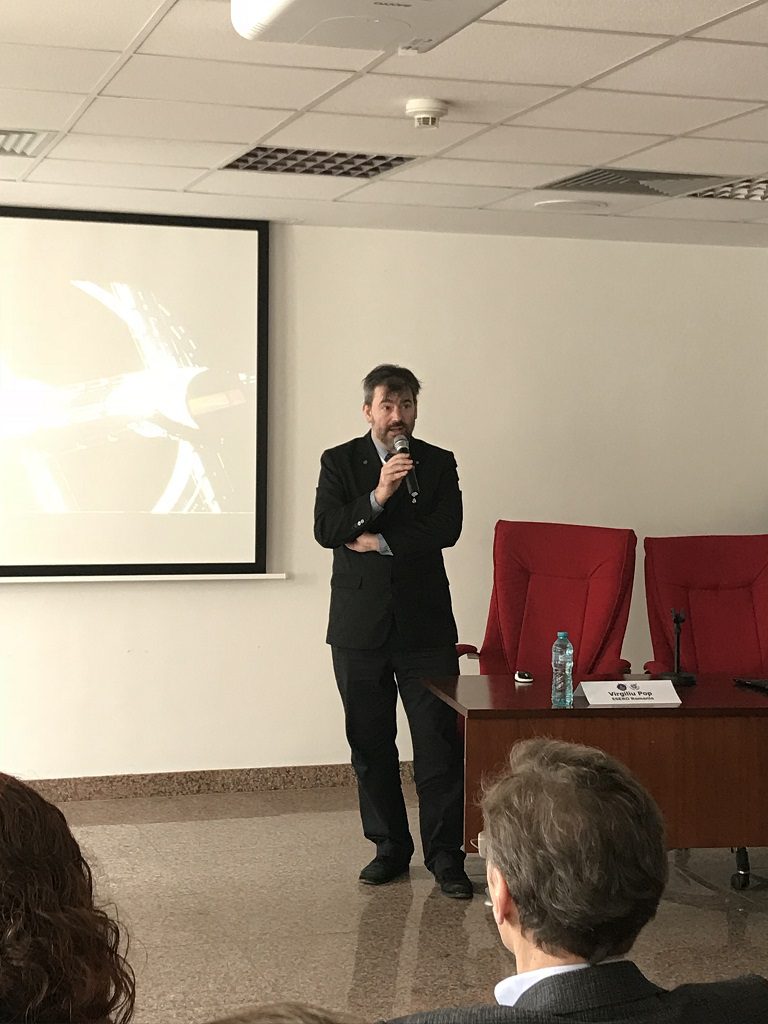 The event also enjoyed the presence of Patrick O’Keeffe, NATO Legal Advisor at the COE CSW Center, and Dr. Bleddyn E. Bowen, lecturer in international relations at the University of Leicester. 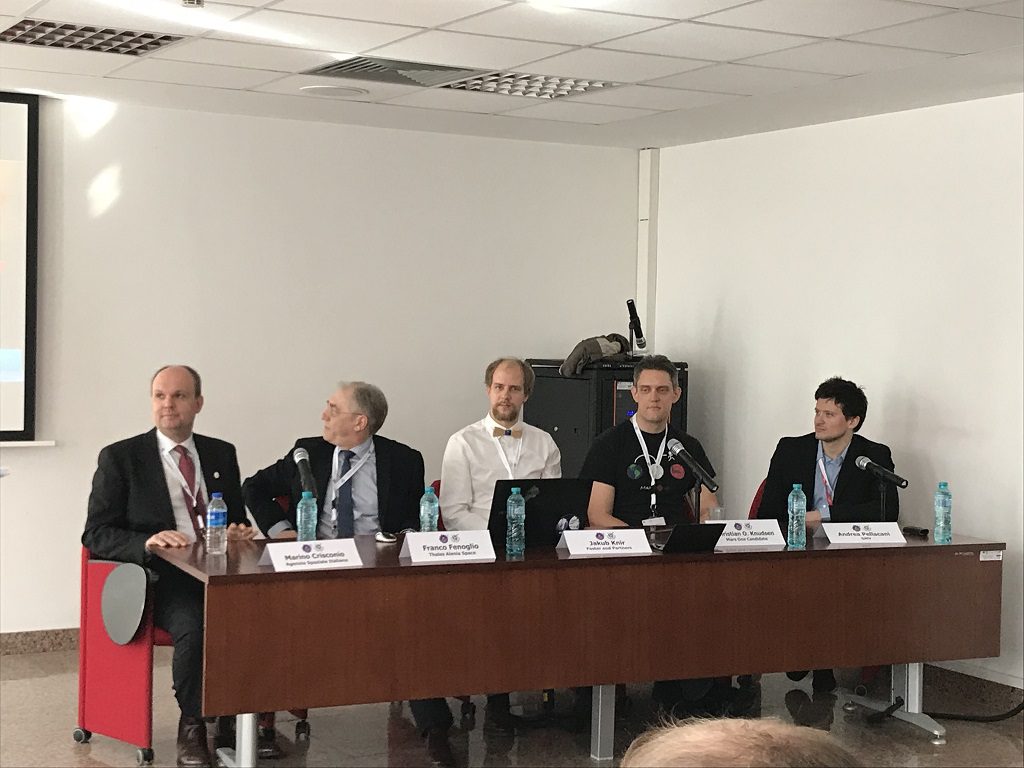 The panel dedicated to Space Exploration consisted of the following speakers (Photo from left to right):

The future astronaut who trains for a no return flight to Mars, Christian Ohlendorff Knudsen, particulary attracted the entire attention. The five panelists were asked by moderator Akash Trivedi which is the time horizon when we will touch the planet Mars with human crew. Christian replied that there are two scenarios: one if sacrifice, for which he estimated 10 years, and other where the astronauts’ safety and comfort will prevail, in approximately 20 years. Marino and Franco placed landing on Mars at 20 years plus. Jakub and Andrea estimated 15 years. Problems still unresolved were mentioned, especially the cosmic radiation effect on humans. An original presence of an architecture company, Foster and Partners, surprised the audience. The architecture however is that of buildings on the Moon or on Mars, using a 3D printer capable of processing basalt dust abundant on these celestial bodies to build the future shelters.

On behalf of the space industry, Mansoor Shar of Inmarsat and Jaroslaw Jaworski, Head of Robotics PIAP Space also participated.

Andrea Pellacani, aerospace engineer, made a separate presentation of the GMV company. In the photo I caught him together with the Faculty of Aerospace Engineering Alumnus, Corina Știubei, who was deputy organizer of the SGAC event. 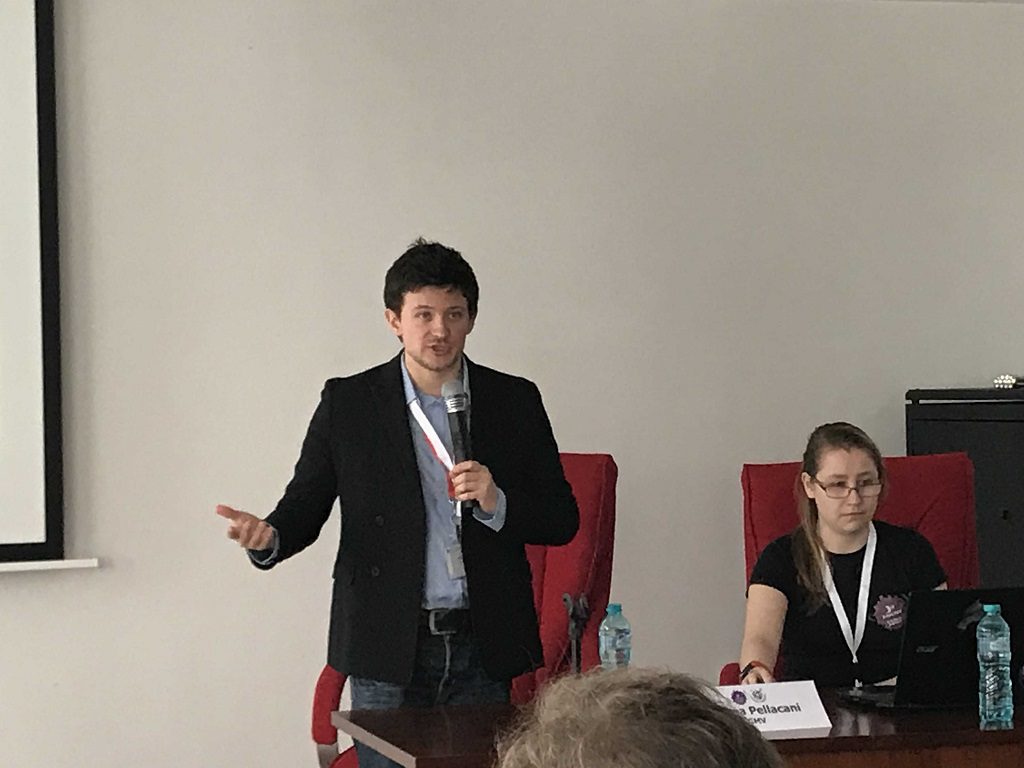 The Spanish company GMV expanded on more continents, becoming a multinational corporation. It is involved in many ESA projects. Absolute and Relative Navigation of the mission in Project Luna-Resurs and the Guidance Navigation and Control algorithm (GNC) of the ROSETTA mission for the Asteroid Impact Mission (AIM) are just two of the applications developed by GMV. Andrea concluded that the key issues of exploring the new frontiers (Moon, Asteroids and Mars) are the GNC algorithms which run and take autonomous decisions, in contrast to the current practice when all decisions are taken in a Control Center on Earth. In enabling this, an essential role will belong to space navigation. This statement confirmed my own ideas and supplied me with a motivational resource for the students whom I am trying to teach air navigation and space navigation. To remember this inspirational moment, I took a photo with Andrea. 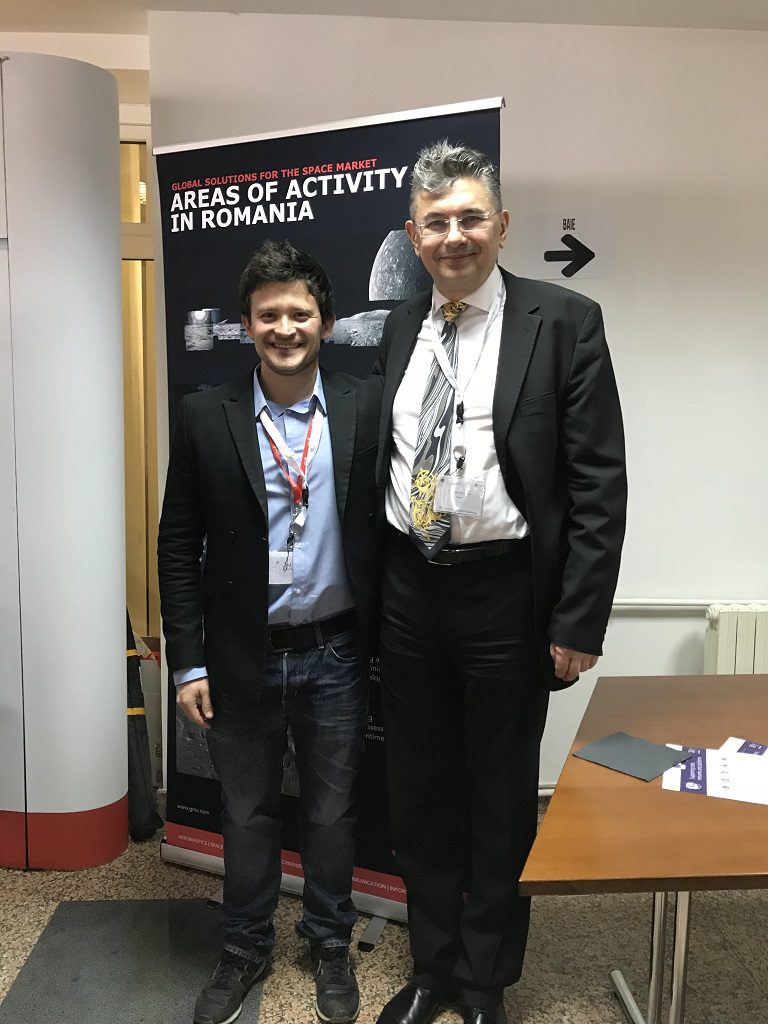 It was particularly rewarding to hear Andrea Pellacani mentioning that ”the Romanian GMV subsidiary is very nice, active, already involved in important projects” and that ”we will see it in a lot of projects in the future”. The GMV Romania subsidiary employed a substantial number of Alumni of the Faculty of Aerospace Engineering. In the next photo I caught Eng. Cristian Corneliu Chițu, Space Director of GMV Romania, with Eng. Florin Mistrăpău. Both are graduates of the Faculty of Aerospace Engineering. Cristian graduated Aerospace Constructions in 2009, and Florin graduated Equipment and Aviation Systems in 2015 and the Avionics and Aerospace Navigation master program in 2017. Director Cristian Chițu mentioned that GMV Romania has a medium term plan to employ more 20 aerospace engineers. 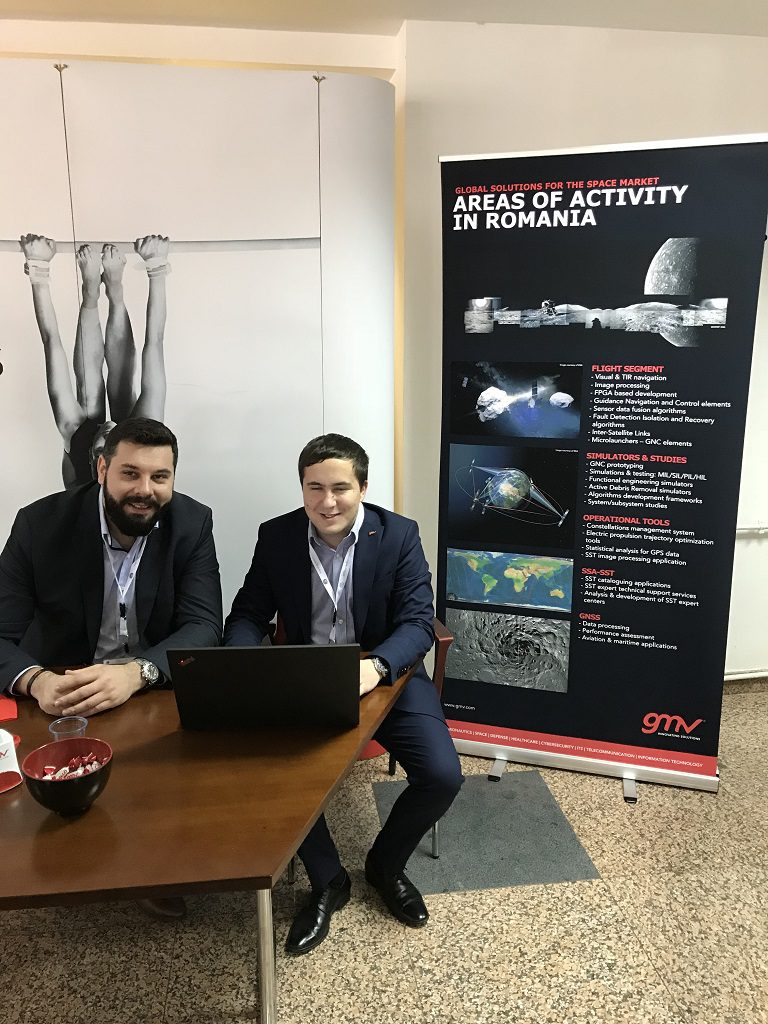 Another company who looks to recruit young aerospace engineers who participated to the event was HE Space, represented by Ioana Șelaru, Technical Recruiter.

The event had a nice closure with a gala dinner at the sumptuous Ghica Palace on Calea Victoriei. We hope that Romania appealed to the guests and they would gladly return on the occasion of future international aerospace events.