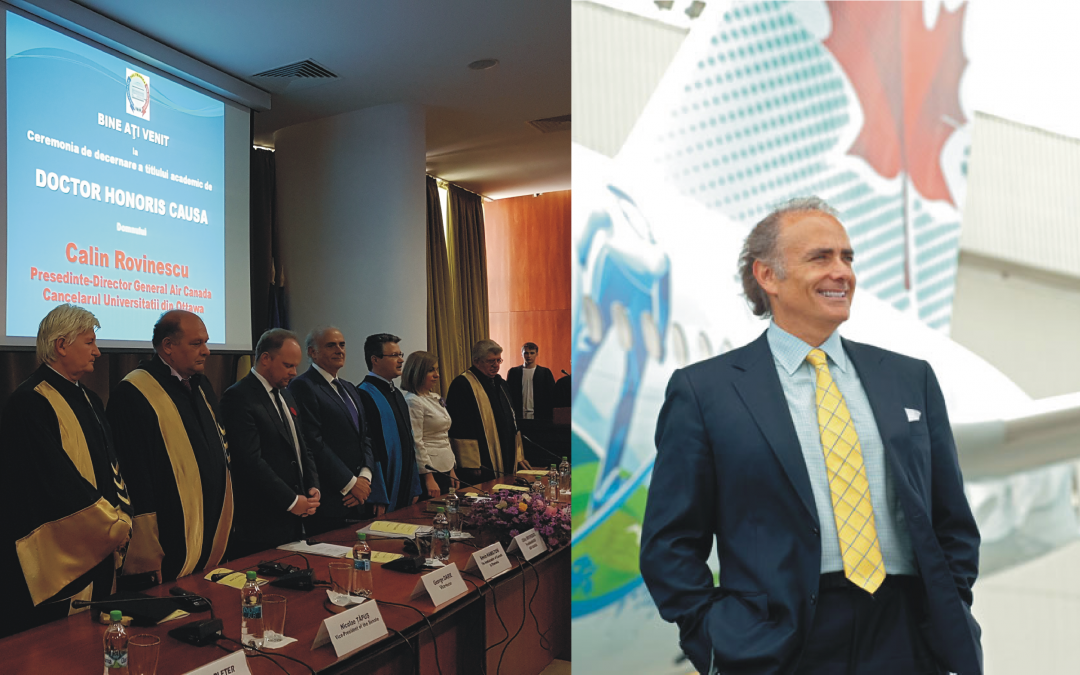 On 11 November 2016 in the Senate Room of the University Politehnica of Bucharest, the legendary President of Air Canada, Călin Rovinescu was awarded the title of Doctor Honoris Causa by the Rector of UPB, Mihnea Costoiu, in presence of His Excellency, Kevin Hamilton, the ambassador of Canada in Bucharest.

Laudatio was presented by the Chancellor of UPB, Prof. dr. ing. Iulian Ripoșan

The speech of Mr. Călin Rovinescu, President of Air Canada:

“Thank you! Ladies and gentlemen, it is a pleasure to be here today. It is a moment of pride, and in the same time very emotional for me  – receiving the title of Doctor Honoris Causa. As you see, my Romanian is rusty. As you learned from the presentation made by the Rector, I left Romania when I was 5 years old, together with my family. Before coming here, I had the opportunity to read some interesting facts about the history of almost 200 years of this university. It is a privilege for me to be invited to join the family of the University Politehnica of Bucharest. My latest university diploma (except this of today) dates from 1980. So much has been changed since then and until now… In 1980, the Internet and the mobile phones were of limited use. The same for personal computers. In 1980, digital meant to use your fingers to press the buttons of a cassette player to listen to music. Since then, we had the privilege to see before our eyes how the world has evolved and radically transformed. Especially in the technology level. We live now in a world where the things that we love are everywhere, changes and innovations being for many of us, the favorite weapons.

Let us look at the aeronautical industry and the astronautical one. Think for a moment how many things have changed with that 12 seconds long flight of the Wright brothers. Today, aviation is faster, safer, less noisy, more environment friendly, and from many perspectives, digital. Boeing challenges Airbus, Airbus challenges Boeing. Bombardier challenges Embraer and the Chinese have just joined the party. The low cost operators made the legacy carriers (such as Air Canada, British Airways, Lufthansa or Air France) to be more agile, more innovative. Starting with that 12 seconds flight, the airplanes are now flying non-stop for 14,5 hours, even longer, to any remote place in the world, using the busy route network worldwide.

Now, aviation is more competitive than ever before and it should stay that way! When it comes to global competition, you cannot place innovation in a legal framework, but you can inhibit it just by being average as education level. Let us admit openly: mediocrity is not enough any more these days in science, technology, design, business or universities. Even more so in a hypercompetitive field such as aviation, where risk taking and speed will play a greater role in defining success. The truth is that you need a great deal of change, of challenges and innovation to succeed in a globalized world. To succeed you need an innovative agenda, new stuff, not just repeating the same things that you have constantly done until now and hope for other results. From this perspective, I like the thoughts of Thomas Friedman, editorial at the New York Times and author of the book ”The world is flat”, who quoted President Obama with a declaration from November 2010: “And we should be able to agree now that it makes no sense for China to have better rail systems than us, and Singapore having better airports than us.  And we just learned that China now has the fastest supercomputer on Earth — that used to be us.  They’re making investments because they know those investments will pay off over the long term.” We wonder how the Chinese manage to build railways and airports faster and better than us, while in some parts of North America and in Europe, infrastructure projects (bridges, roads) are debated for 5 or 10 years before deciding to build them or not. In a supercompetitive industry, we cannot go on like that.

In business, avoiding mediocrity implies taking some risks: proposing innovative goods or services, even if we must operate outside our comfort zone. People are always afraid of risks. However, in order to progress, the risk, the risk of change, and even the risk of failure, are not only good, but I would say imperative. Avoiding mediocrity requires to adopt ”next generation” technology. Sometimes, it takes time to see results, but the best tech companies constantly operate in Beta to succeed in the global arena. Thanks to my job, I had the chance to travel in many emerging markets: Brasil, China, India, South Africa, Turkey, United Arab Emirates. All these interesting markets have 3 elements in common: speed, flexibility and the apprehension to take risks.”

(NN The original speech in English was not available. The above is retro translated in English from Romanian, except for the President Obama quote. Any possible mistake belongs to the translator)