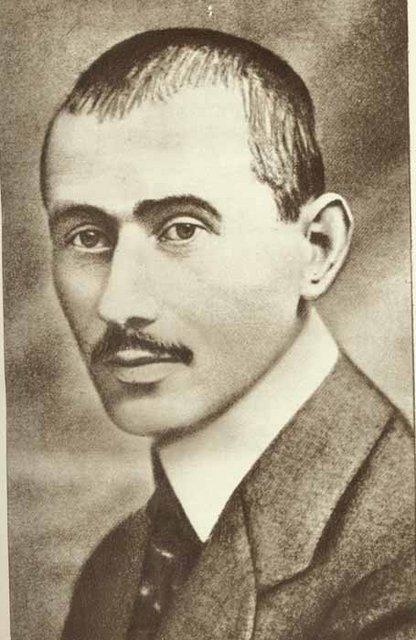 Born in the fall of 1882, on November 19th, Aurel Vlaicu remains a prominent figure in the history of Romania due to his brilliant mind which led him to being the builder of the first Romanian airplane. He was an engineer, inventor, airplane constructor and early pilot. He was born in a village in Transylvania ( Binținți ), which was renamed after him in 1927, at that time part of the Austro-Hungarian Empire. He attended a Calvinist high school in Orăștie, which was also renamed after him, in 1919. In 1902, for two trimesters, he attended courses in Mechanical Engineering in Budapest, before transferring to the Technical University of München, where he later graduated. He then spent about a year working in Russelsheim Germany, as an engineer at Opel, in the Engines Section. He hoped that the powerful automotive concern would be interested in building aircrafts. His dream and most ardent desire was to be able to create something extraordinary for his native country. A letter to a friend in Lugoj , written in November 1908 confirms this

His curious, enterprising nature, didn’t allow him to accept the destiny of a simple engineer. So, by the end of 1908, he returned to his native village

He built a glider on his own which helped him fly many times to Orăștie and Bintinți. Supported by ASTRA Association, he came to Bucharest, at the Military Arsenal, where he built the Vlaicu I monoplane. During his short career, Aurel Vlaicu designed and built one glider and three airplanes based on his own design.

In 1909, on the meadow at the edge of the Bintiţii village, he performs the first flights with the Vlaicu 1909 glider, rising to heights of 10-15 m over distances of 50-100 m. In October 1909, his model is presented to Spiru Haret, Minister of Education, in the Filaret Exhibition Park (today’s Carol Park) in Bucharest Helped by his many friends – writers like Vlahuta, Emil Garleanu, Stefan O. Iosif, George Cosbuc etc – he built an airplane model that impressed Spiru Haret, the Minister of Instruction. Pleased by the success, the ideas and the tenaciousness of Vlaicu, S. Haret lobbied the Romanian government on his behalf and obtained approval for him to build an airplane, the Vlaicu 1, at the Military Arsenal

Consequently, the plane Vlaicu I is built, equipped with 2 coaxial, contra rotating propellers, powered by a 50 HP Gnome rotating engine of French provenance, tested on the Traian Vuia test bed. On June 17th 1910, after a takeoff run of approx. 40 on the Cotroceni Field, the Vlaicu I plane, flown by its creator and builder, rose from the ground to a height of 3-4 m, and after floating in the air cca. 50m, landed smoothly and safely. It executed precisely cornering, both to the right and to the left side while foreign aircrafts did only left turns. It had only one wing while the aeroplanes at that time owned two or three overlapping wings

Models 1 and 2 used Gnôme rotary engines type Omega, with 7 cylinders, star arrangement, maximum power 50 horse power (HP) at 1200 rot per minute They were manufactured by Société des Moteurs Gnôme which changed name in 1914 to Gnôme et Rhône. In terms of kg/HP, Gnôme engines were the most advanced of the time, because of their unique, simple design .However, after 1918, rotary engines were no longer manufactured because of the gyroscopic effect the engine + propellers induced, making the aircraft difficult to control. Vlaicu’s design diminished this gyroscopic effect because the front propeller rotated in the opposite direction and the rear propellers in the same direction as the engine. Moreover, the two propellers, being coaxial, canceled each other’s reaction torque (i.e. a twin rotor helicopter does not need a tail rotor, a design reapplied only years later by Macchi-Castoldi)

“…The field was rather empty that day, because no announcement has been made; only a few friends and journalists, many children from the neighboring and soldiers in the service showed up. The moment Vlaicu climbed into the nacelle was solemn ; surely people were, just like me, reluctant, afraid for his life. Only HRH Prince Carol approached the aircraft to see how it works from the rudders to the handlebars. A soldier comes and puts the engine in motion. Vlaicu beckons with his hand to the soldiers to let go. With a deafening wheeze, the aeroplane started to roll in a straight line over the smooth field, but did not rise from the Earth … only at his third attempt, suddenly, we see the aeroplane floating in the air, swinging from one side to the other, about a meter away from Earth. On descent, the pilot was applauded and embraced by acquaintances, friends and protectors . HRH Prince Carol shaked his hand “Congratulations Vlaicu, you did fly!””.(Gheorghe Murgoci, „Primul zbor al lui Vlaicu”, „Flacăra” , 2nd Year, nr. 48.)

In the autumn of 1910, Aurel Vlaicu began designing a new airplane and built it at the “Arts and Professions School” again with the help of Spiru Haret. Named Vlaicu 2, this significantly improved plane flew at Liberty Field-Blaj, during the 50th anniversary celebration of the establishment of the “Romanian Literature and Culture Association.” He then went on aviation tours in Sibiu, Brasov, Iasi and other national towns, where “Vlaicu 2” set some special performances (flight at 1000m altitude, range speed 90 km/h, acrobatic trajectory).For all these, he received “Gheorghe Lazar” prize, given by Romania Academics at Spiru Haret proposal.

In the summer of 1912, at the international air show from Aspern-Viena, in the company of some of the most famous European pilots, he gained first place for hitting with a projectile a designated target from 300 m high and second place for accurate landing, after French pilot Roland Garros.

1913 is the year Vlaicu starts designing the third model in his series of powered aircraft- A Vlaicu III. The design was based on his earlier A Vlaicu II, featuring a nacelle underneath a parasol wing housed the pilot and a Gnome Gamma engine. Gears, chains and shafts drove two propellers, one in front of and one behind the wing; these turned in opposite directions to cancel each other’s torque. Like Vlaicu’s other designs, the A. Vlaicu III did not have ailerons. The pilot turned the aircraft by using the rudder, controlled by moving a tiller left or right; to control the elevators and make the aircraft go up and down, a steering wheel attached to the tiller was turned left or right.

It was the world’s first metal-built aircraft, the idea itself being remarkable for the time

Learning that another man was also planning to cross the Carpathians, Vlaicu decided not to wait and took off from Bucharest in Vlaicu II. On September 13, 1913 he was flying over the village of Bănești Prahova when the plane crashed, killing him on impact. The causes of that deadly plane crash have not been elucidated until now: either technical malfunction or heart attack. Vlaicu’s medic said that he may have died in the air, being physically exhausted and having a kidney problem, which would had led to a heart attack.

At the time of Vlaicu’s death in the crash there were two A. Vlaicu IIIs were under construction .The British company Marconi was supposed to receive one for performance evaluation and experimentation with aerial radio, the other was supposed to remain in Romania. After Vlaicu’s death, one of the two aircrafts was completed by his friends Giovanni Magnani and Constantin Silisteanu; and it was ready to fly in May 1914. In 1916, during the German occupation of Bucharest, an A Vlaicu III was seized and shipped to Germany. It was last seen in 1942 at an aviation exhibition in Berlin by Romanian military officers

–>June 17, the day of Aurel Vlaicu’s first powered flight, is celebrated as The National Aviation Day of Romania.

–>The second largest airport in Romania, Aurel Vlaicu-Băneasa International Airport, and a YR-ASA registered TAROM Airbus A318-111 are named after him.

–>His name is listed second on the Romanian Airmen Heroes Memorial in Bucharest, after Gheorghe Caranda and before his friend and fellow pilot, Gheorghe Negel, who died in a plane crash one month after Vlaicu, on October 11, 1913.

–>A museum was established in his home village, now named Aurel Vlaicu, and a monument was erected near Bănești where he crashed his plane

–>The 50 Romanian lei banknote has a portrait of Vlaicu on the obverse, and on the reverse a drawing of one of his airplanes and a cross-section of the airplane’s engine.

–>A commemorative 50 bani coin was issued by the Romanian National Bank in 2010.

–>His life was the subject of a novel “Flăcăul din Binţinţi” by Constantin Ghiban (published in 1953), and of a movie by Mircea Drăgan (released in 1978)