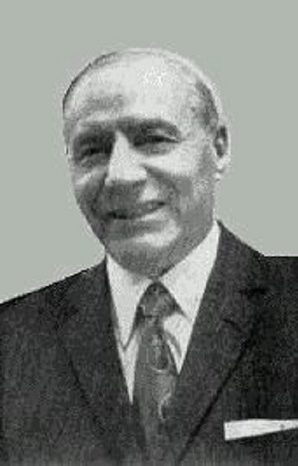 Elie CARAFOLI is one of the founders of the Romanian school of aeronautics, among Traian VUIA, Aurel VLAICU, Henri COANDĂ, Ion STROESCU, Radu MANICATIDE and others.

He was born in 1901 in the town of Veria (near Thessaloniki) in a community of Aromanians, where he studied primary school.

In the autumn of 1915 he left for Bitolia (Serbia) where he enrolled in the 4th class of the high school in this town. The high school soon closed due to the occupation of Serbia by the armies of the Central Powers. In mid war he heads towards Bucharest. With great effort he reaches Giurgiu and then Bucharest, where he continues to study at the “Gh.Lazăr” high school and then at the military high school  “Dealu Monastery”.

In 1919 he is admitted at the Polytechnical School, getting a diploma of electro-mechanical engineer. Later he studies at the Sorbone, in Paris (1924), for his graduate degree and PhD in Science (Physics and Mathematics). Until 1928 he works at the Aerotechnical Institute of Saint-Cyr, where he authors many papers and books. A remarkable book is the fundamental book on aerodynamics dedicated to the airfoil theory. Some of these airfoils have entered the scientific community under the name of “Carafoli Airfoils”.

At the Aerotechnical Institute, together with its Director, Professor Albert Toussaint, he creates the ”hydromechanical installation for viewing the movement specters around aviation bodies” known as the “Toussaint-Carafoli Hydrodynamic Tank”. In the same time, he is assigned at the Chair of Mechanics at Sorbone, led by the well known professor Paul Painlévé, the future Prime Minister of France. Between 1926 and 1928, Carafoli published 8 papers at the Academy of Science of the French Institute in Paris. In the same time, he published 8 scientific articles and 4 comprehensive general studies, which establishes Carafoli’s international recognition (Theory and plotting of airfoils, Influence of winglets over the aerodynamic characteristics of the lift surfaces, Airplane wing aerodynamics, Experimental Research on Monoplane Wings).

In the year 1928 Carafoli gets his PhD in Physics at Sorbone with the thesis “Contributions to the lift theory in aerodynamics”.

A remarkable contribution of Elie Carafoli in his paper ”Confrontation of modern aerodynamic theories with rational mechanics laws” is the decisive argument regarding the physical significance of the resultants of the aerodynamic forces on an airfoil. He gave a rigorous interpretation to that matter, accepted by the scientific community, by the famous Theodor von Karman himself and by Professor Wytoshinsky, the one who had started the controversy, putting an end to this long debate.

In October 1928 Carafoli establishes the Chair of Aerodynamics and Fluid Mechanics, within the Electromechanics section of the Polytechnical School of Bucharest. He will serve as the Head of this Chair for 45 years, progressing to the Aviation Section, and then (1971) the Aircraft Faculty, which currently is the Faculty of Aerospace Engineering of the University Politehnica of Bucharest. Thus, it is safe to state that Carafoli is the father of the Romanian school of aviation engineering. Over 50 generations of engineers were educated by the great scientist.

1930 – Together with the French engineer Lucien Virmaux, he designs the first Romanian airplane manufactured at the IAR-Brașov plant, a low wing monoplane named CV-11 (Carafoli-Virmaux), an original and unusual concept at the time, but validated on a large scale later, in modern aviation. Today, low wing monoplanes dominate the market. He worked closely with other Romanian aviation companies: ICAR, SET.

Together with eng. Ion Stroescu, he creates in the courtyard of the Polytechnical School, the first wind tunnel in Romania (1931), and also the first installation of this type in South-East Europe, with remarkable quality and performance for that time. The wind tunnel built between 1928 and 1930 was officially inaugurated in 1931 by the King Carol the 2nd.

Up to 1941 he also served as technical advisor of the air transport company LARES – Liniile Aeriene Române Exploatate de Stat.

In parallel with teaching and scientific research, Elie CARAFOLI served as chief engineer and later director of the IAR – Industria Aeronautică Română plant in Brașov, where he created, designed, built and tested IAR-CV 11, IAR-13, IAR-14, IAR-15 and IAR-16 airplanes with remarkable performances for the time, comparable with the most successful rivals worldwide. One of these types was ranked in the best 6 airplanes in Europe in a contest in Bucharest, 1931.

In 1948 he is appointed titular member of the Romanian Academy and head of applied mechanics section. In 1949 he is appointed director of the Institute of Steel, Metallurgy, and Applied Mechanics, turned after 2 years in the Institute of Applied Mechanics of the Romanian Academy. Carafoli, as director of the institute, gathers a valuable team of scientists in mechanical engineering. Later, the institute becomes the Institute of Fluid Mechanics, with a special bias to the aviation basic fields: aerodynamics, fluid mechanics, flight dynamics, structure calculation etc. Due to his personality and example of total dedication to science, the institute was a veritable launching pad for valuable scientists, recognized all over the world.

For his vast activity of research in aerodynamics and the great deal of scientific papers published both under the Romanian Academy and worldwide, Carafoli was rewarded with the “Louis Breguet” Prize (Paris,1927) and “Silver Medal”(1928) awarded at the Sorbone by the National Society for Encouraging Progress by E. Herriot, ex Prime Minister of France, the Diploma Paul Tissandier awarded by the International Aviation Federation at the Los Angeles Congress (1956), the Great Medal Gauss which is awarded once every year to the best scientist worldwide, selected by the Scientific Society Braunschweig – Germany for “remarkable and road opening works“, the “Apollo 11” Medal awarded by NASA in 1970, the Diploma and the Medali “Tsiolkovsky” on 27 March 1981. In the country he was rewarded with the title EMERITUS SCIENTIST of Romania, the State Prize 1st Class, The Work Order 1st Class, the Scientific Merit 1st Order, The Star of the Republic, 2nd Class.

As an internationally accomplished researcher and scientist, he was elected by many forums as member or president: Romanian Academy, National Commission for UNESCO, President of the Technical Section of the Romanian Academy, honorary member of the Royal Academy of Aeronautics of the UK, corresponding member of Science and Art Academy in Toulouse, foreign member of Braunschweigische Vissenschaftlische Gesellschaft – Germany, extraordinary member of “Internationale Astronautische Gesselschaft Herman Oberth” – Germany, member in the Executive Committee and the Executive Bureau of the International Council of Scientific Unions (I.C.S.U.), member of the New York Science Academy. He definitely was an important scientific personality, both in the country and globally.

The Room I-013 in Campus Polizu at the Faculty of Aerospace Engineering was named Acad. Elie Carafoli. The quote on the wall says that ”We Romanians, are able to learn with great talent the most advanced methods, we may rely on this human resource, to accomplish outstanding things” 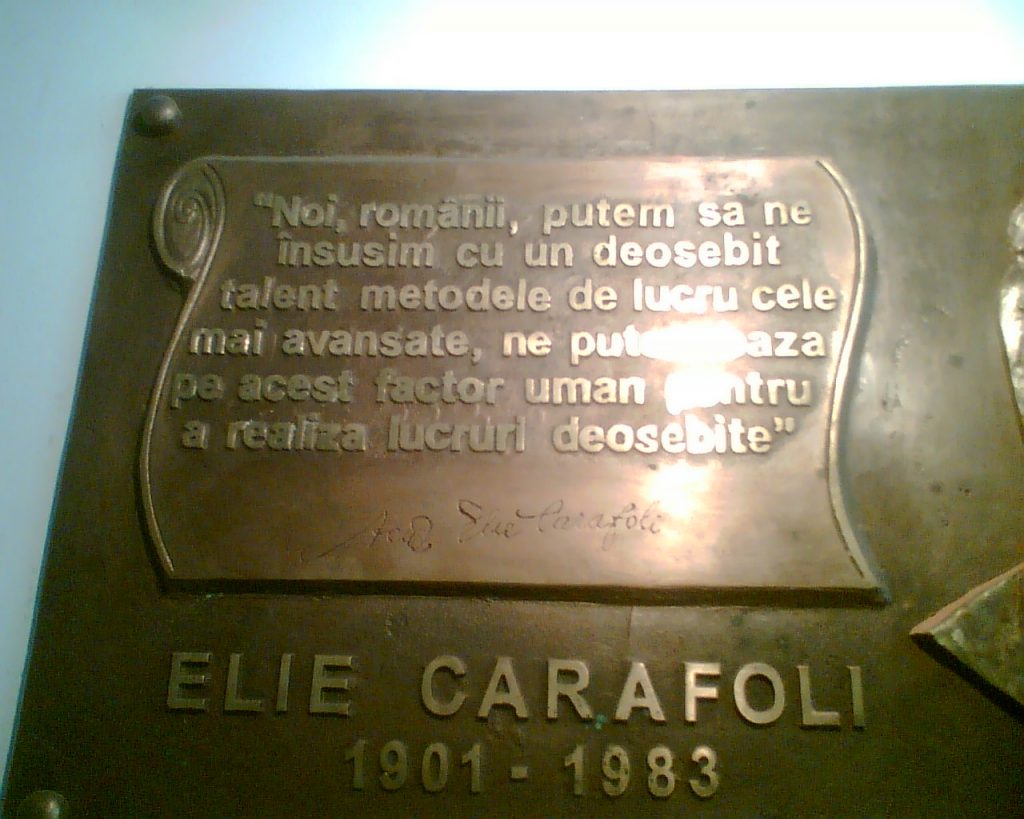