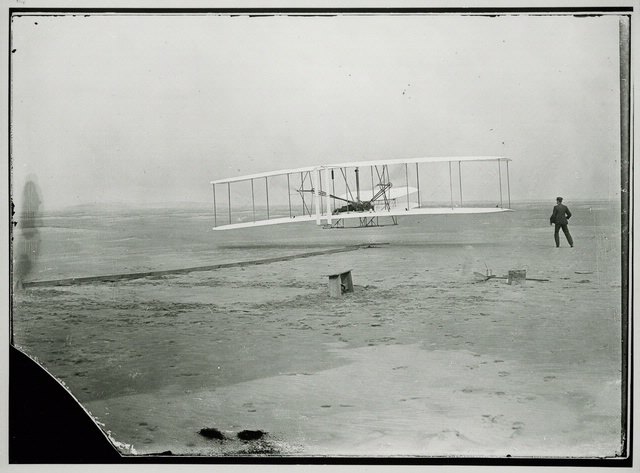 Today in 1903: Wilbur and Orville Wright made four brief flights at Kitty Hawk, North Carolina, with their first powered aircraft. This photo was taken as Orville piloted the Wright Flyer on its first flight of the day, which lasted 12 seconds and covered 36 m (120 ft). The fourth and final flight, with Wilbur at the controls, covered 255.6 m (852 ft) in 59 seconds. The Wright brothers had invented the first successful airplane. More information in this post by the chief curator Peter Jakab of the National Air and Space Museum, Smithsonian Institution.

The day of 17 December 1903 is considered the birthday of aviation although there are many previous attempts to fly, because the Wright brothers invented and succeeded to fly the first airplane controllable from the air, with the controls that we still use today: elevator, aileron, rudder. Thus, unlike previous flights, their flight was controlled: they climbed, descended and turned.