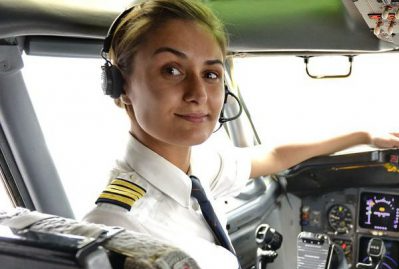 Every day at work, Laura Gârdu visits an European city. She does not go shopping, she barely has the chance to see the airport, the city stays out of reach. But she works travelling, a dream which occupies the mind of many white collars.

180 hours on helicopters and 3,500 hours on Boeing airplanes. This are Laura Gârdu’s career numbers up to now (she is 32), graduate of the Romanian Aviation Academy and the Faculty of Aerospace Engineering, now airline captain. Her dream is to fly a Boeing 777, a large airplane used on intercontinental flights.

She does not talk much, but says that heights attracted her since she was small: ”When I was a child and I saw airplanes in the sky, I followed them with my sight and I wish I reached them. I had a time in my childhood, when to the question ”What would you like to do when you will grow up?”, my reply was ”Cosmonaut”. Later, I did not stick to this option, but somehow the destiny brought me to aviation” says Laura Gârdu, whom I met at the headquarters of the Blue Air airline, when she was browsing aviation magazines. By the way, one of the key moments in her life was when she discovered the Top Gun magazines in high school. ”Then I wanted to become a pilot”.

For 7 years now, her office is the cockpit of a Boeing 737, where she coordinates two return flights daily, on the routes of the low cost company Blue Air. For 5-6 hours daily she flies the company aircraft, on all company routes. She flew smaller aircraft before. She has 55 hours of flight on Cessna 172S, 20 hours on Diamond Katana Da-20, 20 hours on Piper Seneca PA-24, and 180 hours on Eurocopter EC-120 and EC-155B helicopters.

After graduating the National College ”Cantemir Vodă” in Bucharest in 2000, computer science profile, Laura Gârdu chose to study aerospace at the Faculty of Aerospace Engineering of the University Politehnica of Bucharest (2000-2005), and in 2004-2007 she followed the courses of the Romanian Aviation Academy to become a commercial helicopter pilot.

”Before choosing the faculty, my only flying experience was a Bucharest-London flight, as a passenger. I had a passion for aviation, not something inherited from my family. My parents saw me a medicine student, or a foreign languages one. At the Romanian Aviation Academy admission, I took maths, physics and English tests, eliminatory tests, besides the medical test: ”60% of the candidates failed the medical test. You need a clear motivation if you want to become a pilot. I did my best to become one, I wanted it very much, the personal factor mattered.”

Up to 20 placed are budgeted annually at the Romanian Aviation Academy. The ATPL (Airlines Transport Pilot Licence) enables the operation on passenger aircraft, and the tuition costs like Euro 60,000 and takes maximum 36 months and 220 flying hours (partially on simulators). When graduating the courses, you take theory and practical tests for getting the ATPL licence, which is the highest qualification of a pilot. This licence is valid for 7 years, during which time the pilot must gather 1,500 flight hours, otherwise the licence may be lost.

A graduate of the Romanian Aviation Academy who followed an integrated ATPL program has a co-pilot qualification on multi-engine airplanes and equipped for public air transport, with a possibility to reach Captain after other courses. After school however, every graduate takes additional training at the companies they are hired, to train for the specific airplanes that they are using.

At Blue Air there are 76 pilots, but only 4 are women co-pilots, and 2 are captain pilots. Laura Gârdu’s husband is also a pilot in the company, both of them being recruited in 2007.

Laura Gârdu says that she has working hours like any other employee, but the schedule starts always at different hours. Every time she ends the program, she goes home, to her family. In her spare time, she does spots, roller skating or riding the bicycle.

”To be a pilot means that I have a job that I love, which brings satisfactions, emotions, and a confirmation of the fact that everyone needs to be encouraged to do what they like, because this way they will deliver the best results. Since I decided for a career in aviation, the road to the cockpit seemed not hard, not easy, just natural. I regarded each challenge as a natural step, which must be taken to reach the goal.”

”A great joy each flight is the pure pleasure of height, a cut from the daily noise, but also the adventure of travel, of covering a large distance in a short time. Not only once I caught myself thinking of returning home from a flight: look at me, it is 3 pm and I have already made to Paris and back.”

Even if she reaches other foreign destination daily in the cockpit, she is not a tourist in the same time, because she does not step down from the airplane. She stays in the cockpit to prepare the immediate flight back. ”When I was reaching to a new destination, we pilots do not have the time to admire the landscapes from above, because we are concentrated on landing. On medium haul flights, we do not even get down from the plane, preparing the flight back instead” says Laura Gârdu.

Laura Gârdu says that aviation challenges match the satisfaction coming out of it. Periodically, a pilot must pass a series of exams and tests, and while flying, he or she must expect anything: ”What does anything mean? Difficult weather conditions and the element of unknown in general, which might occur in any moment, making each flight unique, not even on the same route, at the same hour or on the same weather.”